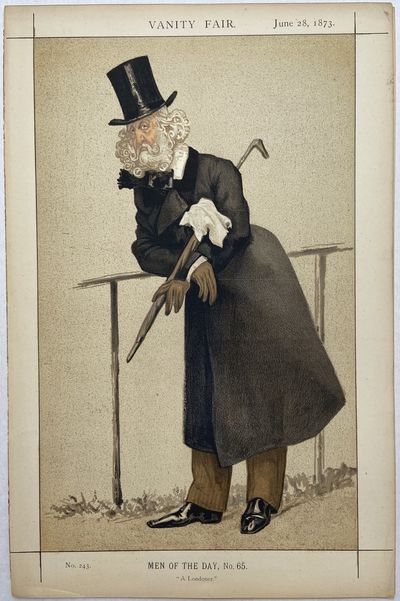 by VANITY FAIR
London: Watford and London, 1873. Color lithograph. Sheet measures 14 x 9". Accompanying text page with same dimensions. Mr. Washington Hibbert is featured in this June 28, 1873 issue of Vanity Fair by French artist, James Jacques Joseph Tissot. Hibbert's father was believed to have roots as a slave owner based in Jamaica. The print is in good condition with slight toning to edges, not affecting the image. Tape residue in left margin from binding. Text printed above and below the image and supplement text included. The British Vanity Fair (1868--1914), a compendium and often critique of Victorian culture, is best known today for its lithographed caricatures of contemporary figures and issues. Its portrait series pictured and described--with both praise and caricature--prominent Victorian and Edwardian politicians, lawyers, doctors, and similar professionals. These images, as well as other series of portraits, accompanies literary and political articles, cultural reviews, serialized fiction, and other standard weekly magazine features. As the publication grew, it turned increasingly toward gossip as a topic, as reflected in the long-running series of portraits. (Inventory #: 296521)
$200.00 add to cart or Buy Direct from
Argosy Book Store
Share this item

Paris : Louis Charles Desnos , 1771
(click for more details about Iris flowers)
View all from this seller>