1. [ANONYMOUS] An impartial account of what pass'd most remarkable in the last session of Parliament, relating to the case of Dr. Henry Sacheverell. Done on such another paper and letter, and may therefore be bound up with the Tryal of the said Doctor; An exact list of the members of the honourable House of Commons, for England and Wales, who, in some or other of the questions upon the impeachment of Dr Henry Sacheverel for high crimes and misdemeanors, voted for and against him. [BOUND WITH] 2. SACHEVERELL, Henry The tryal of Dr. Henry Sacheverell, before the House of Peers, for high crimes and misdemeanors; upon an impeachment ... published by order of the House of Peers. [BOUND WITH] 3. [HOUSE OF LORDS] The names of the Right Honourable peers, who protested against some proceedings in the case of Dr. Henry Sacheverell. Together with their Lordships reasons for such their protestation. [BOUND WITH] 4. BURNET, Gilbert, TALBOT, William, WAKE, William and others. The Bishop of Salisbury's and the 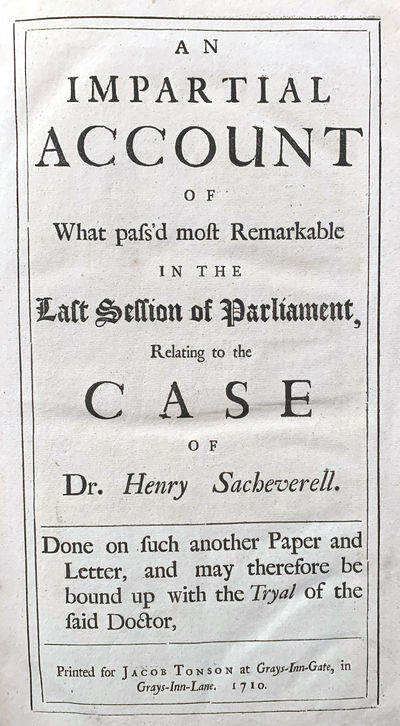 by SACHEVERELL, Henry
Frontispiece engraved portrait of Sacheverell, woodcut devices on some title pages. Contemporary full calf, an Oxford-style binding with blind tooling, spine in compartments with morocco label, corners and joints worn; interior excellent. From the library of the Duke of Leeds with the Leeds bookplate (Pax in Bello) on the front paste-down with a manuscript notation "Leeds 1901" directly under the bookplate.

According to Madan, the imprint of this edition of An impartial account is false and was actually printed by Abel Roper. The list of Members of Parliament at the end of this tract include a notation for each vote (either for or against).

Sacheverell (ca. 1674–1724) was a clergyman in the Church of England and a religious controversialist known for his inflammatory and incendiary sermons. Eventually, his words incurred the wrath of Parliament. On November 5, 1709, the anniversary of both the Gunpowder Plot in 1609 and the landing of William of Orange in 1688, Sacheverell delivered a sermon comparing the Glorious Revolution with the execution of Charles I on January 30, 1649. Traditionally, speeches and sermons compared the Gunpowder Plot and the Glorious Revolution as celebratory actions that freed England from popery, since both events fought against Catholic monarchs. Sacheverell, however, viewed the more recent Glorious Revolution in relation to the regicide of Charles I and turned the sermon as an attack against Catholics and nonconformists. The majority of his speech vehemently criticized the "sectarists and schismatics of whatsoever wild, romantic or enthusiastic notions so as to make the House of God not only a den of thieves by a receptacle of Legions of Devils" (The Perils of False Brethren, 1974, p. 13).

Sermons like these required permission from the city fathers before being printed. Despite never receiving their permission, Sacheverell employed Henry Clements to print copies of his speech entitled The Perils of False Brethren. The editions were cheap and small-format, and sales reached their peak at around 100,000 copies. The Whig-controlled government was incensed since Sacheverell suggested that there was no resistance during the Glorious Revolution and were determined to punish him. They decided to impeach the clergyman before the House of Lords on account of his seditious pamphlets. They drew up four articles of impeachment that formed the basis of Sacheverell's trial. He had the support of the Tories and the public, but the House of Lords found him guilty. However, he was given a lenient and mild sentence, so the doctor and the Tories viewed the whole proceeding as a victory.The ensuing trial and sentencing was widely publicized and numerous publications were issued detailing the proceedings. This volume includes six texts relating to the trial that began in January 1710. The first two texts, An impartial account and The tryal, provide accounts of the trial itself and includes transcripts and chronologies of the proceedings. The tryal additionally contains Sacheverell's answers to the impeachment articles and a reprinting of The Perils of False Brethren. Of the remaining four pamphlets bound in this volume, only The names of the Right Honourable peers was written in support of Sacheverell. The remaining three are speeches from various bishops and lords supporting the claims in the articles of impeachment that the House of Commons devised for the trial. (Inventory #: 17977)
$1,200.00 add to cart or Buy Direct from
Rootenberg Rare Books
Share this item

London : Ward, Lock, and Co , 1880
(click for more details about Rob Roy ... with illustrations by Riou, E. Courboin, G. Durand, and H. Toussaint)
View all from this seller>