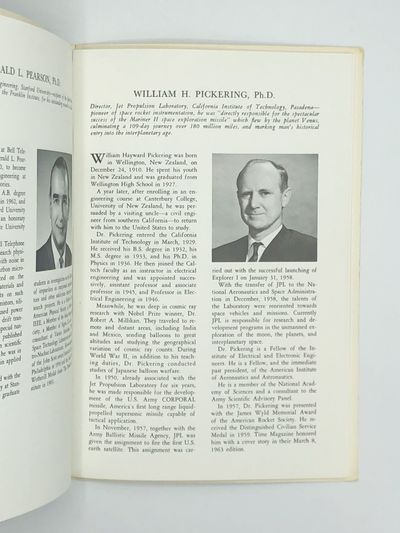 by Pickering, William Hayward (1910-2004)
A collection of 12 scrapbooks and photographic albums, along with other related ephemera, kept by Muriel Pickering, the wife of William Hayward Pickering (1910-2004), the fourth director and longtime head of NASA's Jet Propulsion Laboratory in Pasadena. The materials document several of the couple's trips around the world and are primarily concerned with their attendance at various International Astronautical Congresses. Dr. Pickering was elected president of the organization in 1964 at the 15th Congress in Warsaw and elected to a second term at the 16th Congress in Athens. Pickering, born in Wellington, New Zealand, was a childhood radio enthusiast who emigrated to the United States in 1929 to study electrical engineering at Caltech. With the guidance of Nobel Prize-winning physicist Robert A. Millikan, he earned his Ph.D. in physics and began his professional career as part of Millikan's cosmic ray research team. Perhaps the most significant item in this collection is a photographic album kept by Pickering of a 1939 expedition with Millikan and physicist Victor Neher to India that would serve as a demonstration of Millikan's concept of the theory of particle annihilation. This trip was described in detail in the biography William H. Pickering: America's Deep Space Pioneer (2008) by Douglas Mudgway. The outbreak of World War II coincided with the traveling party's arrival in Sydney. Undeterred, the team decided to press on with their original plan and sailed for Singapore. Under the wartime exigency, their ship would take them no further, but the party managed to find passage on a British freighter and sailed for Calcutta, India via Rangoon, Burma. The photographic album in this collection records this journey through 165 black and white photographs, mostly smaller snap shots (2.5" x 3"), with a few larger images (3.5" x 5") as well. The first 77 photographs are affixed to the pages, many with white ink captions underneath, while the remainder are laid in, many with brief pencil annotations on the verso. Among the locations seen here are Delhi, Peshawar, Kandy, Bangalore, and the Philippines. There are about a dozen photographs showing Millikan, Neher, and others working with what appears to be weather balloons and radio equipment. Notably, this album also contains snapshots of Nobel Prize-winning physicist C.V. Raman, who was present for the experiments, a photograph of Mahatma Gandi on the streets of India, and an image showing a Nazi flag flying over the East Indonesian city of Makassar. Following this expedition, the Pickerings returned to Pasadena, where he served on the Caltech faculty and a short time later, joined the JPL staff, establishing the lab's telemetry and remote control research group. In 1954, he was named director of JPL and remained in this post 22 years. During his tenure, JPL radically transformed, moving out of the weapons business and emerging as America's primary institution for planetary exploration. As NASA's planetary program shrank in the early 1970s, Pickering moved JPL into a new research field: civil systems. This included many small and medium-sized efforts in biomedicine, management systems for police and fire departments, and urban transportation. Pickering was also very active in the larger aerospace community. He spent several years advocating and planning for the merger of the American Rocket Society and the Institute of Aeronautical Sciences into the American Institute of Aeronautics and Astronautics in 1963. He also served as the new organization's first president. After his retirement from JPL, Pickering established a new research institute at Saudi Arabia's College of Petroleum and Minerals and then Pickering Research Corp., a consulting business. In 1983, he formed Lignetics Inc., a manufacturer of wood pellets for use as fuel, and remained involved with it until his death in March 2004. Among this collection is a 1963 scrapbook of the Pickerings' trip to France, where Pickering was the invited speaker at The Institute of Electrical and Electronics Engineers meeting in Paris. He also attended the International Academy of Astronautics congress. Among the memorabilia in this scrapbook are black and white autographed photographs of Soviet cosmonaut Yuri Alekseyevich Gagarin, the first man in space, and Soviet cosmonaut Valentina Tereshkova, the first woman to fly to space. This album also includes a snapshot of Pickering with Gagarin. There is also a black and white photograph of the Pickerings with Frank J. Malina, then IAA President. He was an aerospace engineer and rocketry pioneer who co-founded Caltech's Guggenheim Aeronautical Laboratory and the Rocket Research Project at JPL, where he served as Director of the Laboratory for two years (1944-46). Some minor browning and toning to the album pages, with a faint musty odor; otherwise very good overall. A unique collection of material that provides a personal view of the life and professional development of one of Southern California's most influential and important scientific figures. A complete inventory of the material in this archive is available upon request. (Inventory #: 70606)
$8,500.00 add to cart Available from Johnson
Share this item

DAMN EVERYTHING BUT THE CIRCUS

New York : Holt, Rinehart and Winston , 1970
(click for more details about DAMN EVERYTHING BUT THE CIRCUS)
View all from this seller>