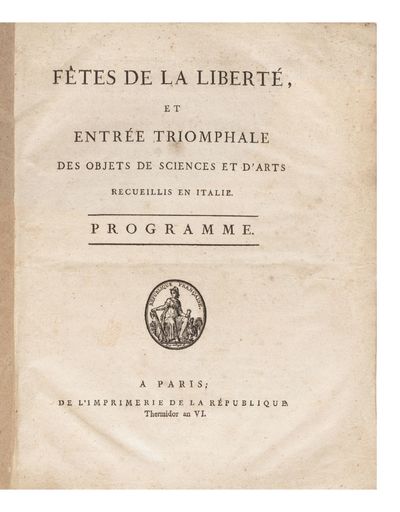 by (SPOLIATION OF ITALY)
Republican wood-cut vignette on title. 23 pp. Large 4to (247 x 200 mm.), later paper wrappers (a little foxed), stitched. Paris: De l'Imprimerie de la République, Thermidor an VI [i.e. July-August 1798]. First and only edition of this rare program - a festival book - presenting the two-day celebration of the French conquest of Italy and the spoliation of its treasures. This is a fascinating record of Revolutionary France's efforts to project its cultural superiority. The looted materials consisted of paintings, antiquities, animals, scientific instruments, minerals, books, manuscripts, medals, etc., all of which were paraded on chariots (chars) on the left bank of the Seine, close to the Muséum d'histoire naturelle. Everything taken from Italy is noted in the text of this work. The program has three "divisions" for the order of the chariots: Histoire Naturelle; Livres, Manuscrits, Médailles, Musique, Caractères d'Imprimerie de Langues Orientales; and Beaux-Arts. Each chariot bears an inscription referring to what it is carrying, and there are banners with text previewing the chariots to follow. Students, librarians, artists, administrators, choirs, professors, etc., were recruited to accompany the chariots and join in song. Pages 14-23 contain hymns and songs to serenade the triumphant procession with most of the lyrics printed in parallel in Latin and French. One of the highlights of this parade was the display of Raphael's Transfiguration, one of one hundred artworks that the terms of the Treaty of Tolentino permitted Napoleon to confiscate from the papal collections. Raphael, an artist whose work was coveted by Napoleon and his advisors, was viewed as "the greatest painter Italy had produced, who epitomized the classical culture of the Italian Renaissance and the glory of Rome, which Napoleon hoped to transfer to Paris."-M. Rosenberg, "Raphael's Transfiguration and Napoleon's Cultural Politics," Eighteenth-Century Studies, Vol. 19, No. 2 (Winter, 1985-86), p. 184. In addition to this famous painting, we find mentions of works by Domenichino, Giulio Romano, Veronese, and Titian. These were carried on the chariots, alongside young artists, recognized artists, administrators of museums, professors of painting, sculpture, architecture, and their students. The Transfiguration was displayed on the first chariot after the antiquities. One of the participants, the art dealer Jean Baptiste Pierre Lebrun (1748-1813), who performed the final song (pp. 22-23), was instrumental in the selection and processing of artworks removed from Italian collections. Among the array of the things (and beings) taken from Italy that were exhibited, we find: grains and vegetables, lions, a bear, agricultural tools, crystals, paintings, Greek and Roman sculptures and monuments, scientific instruments, globes, rare books and manuscripts, etc. In fine condition. (Inventory #: 7090)
$1,500.00 add to cart or Buy Direct from
Jonathan A. Hill, Bookseller
Share this item
Jonathan A. Hill, Bookseller, Inc.
Offered by


(click for more details about [From upper cover]: verlagsverzeichnis 1973, neuerscheinungen und noch erhältliche titel)
View all from this seller>