One Hundredth Anniversary of Maine's Entrance Into the Union, Official Program of State Celebration, Portland, June 26th to July 5th, 1920, Including list of towns to hold local observances and all other information regarding the event; Cover title: Maine Centennial Official Program 1820 1920 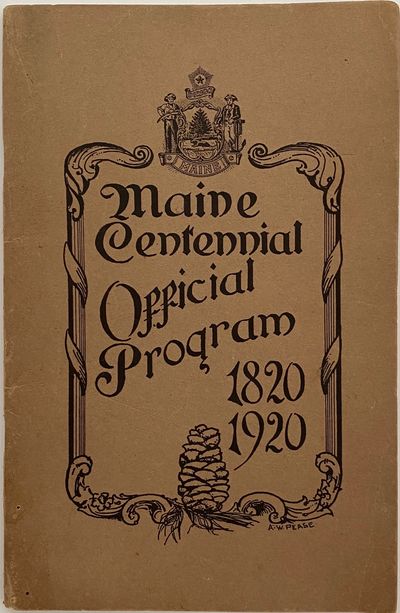 Augusta: Charles E. Nash & Son, 1920. Staplebound. Very good. A. W. PEASE, wrapper illustration. 8vo; 36pp + [12pp lists of parade floats]; tan stiff wrappers, illustrated with a decorative scrolling frame topped with the state seal and finished with a pinecone; two staple binding; cream colored leaves; half-tone photographic illustrations; damp staining to bottom edge but no odors, light rubbing at spine tail; very good. A day by day program of all the celebrations for the Centennial of the State of Maine as celebrated in Portland. Illustrations include scenery, important buildings, and officials. The last 12pp are titled: List of Floats in Historical Floats Parade, and each page features illustrations of two parade floats and a description, for a total of 24 floats. Some horse drawn parade float titles include: "The Visit of the Vikings", "The Dawn of Discovery-John Cabot Spying Land", "The Massacre of Dummer", "Popham Building a Fort at Sagadahoc", "Early Marketing in the Town of Falmouth", "The Pioneers of Aroostook", and "Longfellow" 1807-1882. (Inventory #: 983)
$175.00 add to cart Available from
Sandra L. Hoekstra
Share this item

The Mother's Rule; or, The Right Way and the Wrong Way; Cover title: Arthur's Series

by OPIE, Iona and Peter, editors

Cambridge, Massachusetts : Candlewick Press , 1992
(click for more details about I Saw Esau. The Schoolchild's Pocket Book)
View all from this seller>