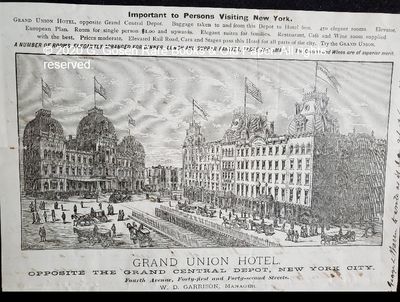 by Emerson, L.
Grand Union Hotel, New York City, January 18, 1883. Autograph letter, ink on paper, signed "L. Emerson" on a sheet of the illustrated Grand Union Hotel stationery, which boasts a half-page woodcut illustration of the Grand Union Hotel, situated across Forty-second Street from the original Grand Central Depot, at the published address: "Grand Union Hotel, opposite the Grand Central Depot, New York City, Fourth Avenue, Forty-first and Forty-second Streets." A woodcut measuring 10 cm x 19.5 cm, the Grand Union Hotel had 450 "elegant rooms," an elevator, the European Plan and a restaurant, as well as private dining rooms. Rates for a single room started at $1.00.
Written from Washington, D.C., on Grand Union Hotel stationery, L. Emerson wrote a nephew, Rufus Emerson, about the train trip from Boston to New York, crossing the Hudson River on the railroad ferry to New Jersey, and continuing south through Philadelphia to Washington, D.C., lodging there at the St. James Hotel, kept by Mr. Woodbury, originally from Salem, N.H. and his chief clerk, a Mr. Wheeler of Haverhill, Massachusetts and the cashier of the "eating room" was a friend of the recipient of the letter. Half of the letter is devoted to L. Emerson's visits to the Smithsonian and Government buildings in Washington, and to the Capitol to hear a debate on using public money to help "the illiterates of the South especially – this will be spirited and animated. Hoar leads off." He also visited the Union Market, describing the vendors as well as the people there, "… such a multitude of blacks vending their goods – They looked pitiful." Condition fine. (Inventory #: 379)
$350.00 add to cart Available from
Gosen Rare Books
Share this item