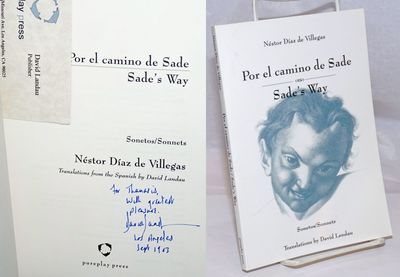 by Diaz de Villegas, Nestor, translated by David Landau
Los Angeles: Pureplay Press, 2003. Paperback. xi, 80p., texts in English & Spanish on facing pages, personal inscription signed by Landau the translator & publisher, translator's note, very good first edition stated trade paperback in white pictorial wraps. Diaz is a Cuban exile who was incarcerated for idealogical deviation due to a poem he wrote and circulated. He struggled with AIDS in 1997 but survived. (Inventory #: 250971)
$25.00 add to cart or Buy Direct from Bolerium Books
Share this item