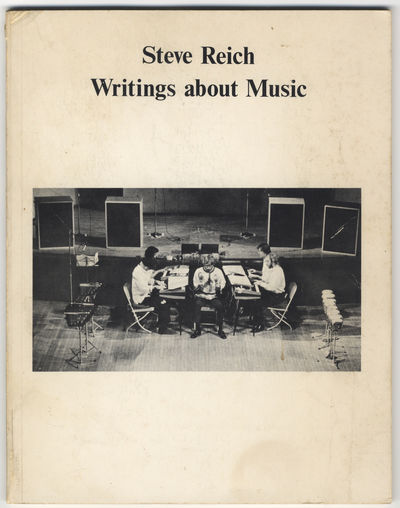 by REICH, Steve b. 1936
Halifax, New York: The Press of the Nova Scotia College of Art and Design, New York University Press, 1974. Small quarto. Original publisher's white coated wrappers with reproduction black-and-white photograph of a group of 5 musicians in rehearsal to upper. 1f. (recto half-title, verso Nova Scotia Series catalogue), 1f. (recto title, verso copyright), 1f. (recto contents, verso blank), 1f. (recto "Introduction," verso blank), 9-71, [1] (blank), 73-76 ("List of Works" and "List of Recordings"), [1] (blank), 78 ("Acknowledgements" and "Photo Index") pp. With publisher's catalogue to verso of lower wrapper: "The Nova Scotia Series Source Materials Of The Contemporary Arts." Illustrations including musical examples, facsimiles of Reich's autograph textual manuscripts, photographic reproductions of performances, and diagrams throughout. Contents include: - Music as a Gradual Process - Pendulum Music - Slow Motion Sound - The Phase Shifting Pulse Gate - Four Organs; An end to Electronics - Some Optimistic Predictions (1970) about the Future of Music - Gahu - A Dance of the Ewe Tribe in Ghana - Postscript to a Brief Study of Balinese and African Music - Notes on Music and Dance - From Program Notes - Notes on the Ensemble - Notes on Compositions Wrappers very slightly worn and soiled; outer edge of upper slightly creased. Early writings by this highly innovative and influential 20th century American composer, later expanded to Writings on Music 1965-2000 edited by Paul Hillier and published in 2004. The first essay in the present volume, Reich's 1968 "Music as a Gradual Process," is generally considered to be one of the most influential theoretical works of the second half of the 20th century. "One of the first masters of the repetitive music that emerged in New York in the mid-1960s and was soon branded 'minimalism', [Reich] has consistently broadened and developed his musical world without compromising the streamlined efficiency and precision of his technique. Repetitive, pulse-driven figures have remained a characteristic, but so have the slips and leaps of a lively mind." Paul Griffiths in Grove Music Online. (Inventory #: 32955)
$165.00 add to cart or Buy Direct from
J. & J. Lubrano Music Antiquarians
Share this item