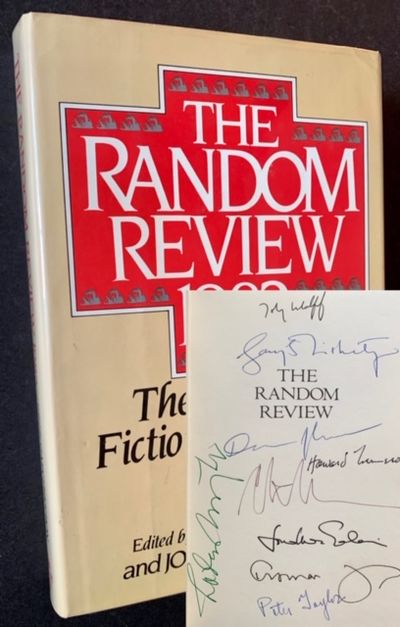 New York: ERandom House, 1982. Hardcover. Very Good +/Near Fine. A very impressive copy of the 1982 stated 1st edition, with a seeming galaxy of signatures connected to the book. SIGNED NOT ONLY BY THE BOOK'S TWO EDITORS --GARY FISKETJON AND JONATHAN GALASSI-- BUT ALSO BY 7 OF THE CONTRIBUTORS, INCLUDING DENIS JOHNSON, TOBIAS WOLFF, HOWARD NEMEROV, PETER TAYLOR, CHARLES WRIGHT, C.K. WILLIAMS AND THOMAS LUX. Solid and VG+ to boot (with just a touch of soiling at the front free endpaper) in a crisp, price-intact, Near Fine dustjacket. Octavo, "the first in an annual series, gathering into one volume the best stories, poems and essays published in American magazines in the preceding year". From the library of William Louis-Dreyfus, renowned poetry benefactor and Chairman of the Board of the Poetry Society of America (1998-2008). (Inventory #: 18074)
$300.00 add to cart or Buy Direct from Appledore Books
Share this item
Appledore Books
Offered by

Boston : Little, Brown and Company , 1977
(click for more details about The Magus)

The Prophet (1933 Printing, in Its Original Dustjacket)

New York : Alfred A. Knopf , 1933
(click for more details about The Prophet (1933 Printing, in Its Original Dustjacket))
View all from this seller>