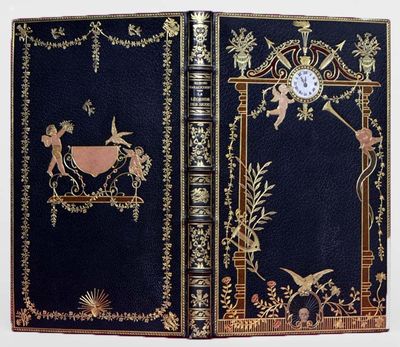 8vo (6" x 9 ½"). In an elegant "Parnassian" binding of black morocco with a multitude of cut and colored leathers that include symbolist designs. Signed Charles Meunier(Parisian binder, disciple of Marius Michel who flourished in the late 19th century). The upper cover of the bindings bears, in brown leather and gilt, an architectural frame of two columns, each topped by a vase of flowers and with a portico with a clock of white leather pointing to almost midnight, a cherub below and a human-headed hydra blowing a long horn, circling the column to the right. At bottom center is a skull with owl atop, with onlays of red roses to the left. The lower cover is decorated with gilt flower sprays, and in the center, in flesh-colored morocco onlays, is the goblet (breast) of Marie-Antoinette** with two cherubs nearby, enjoying the scene. The spine with raised bands is decorated with masks, bows & arrows and nesting birds. Doublures of yellow silk, gilt. Open morocco tipped slipcase, marbled boards. This binding by Meunier reflects the restrained brilliance and exact organization of the Parnassian's style (see below).

Edmond Haraucourt (18 October 1856 Bourmont - November 1941 Paris) was a French poet and novelist. His first published work La Légende des Sexes. Poëmes hysteriques appeared under the pseudonym of Le Sire de Chambley. Printed in Nevers, when he was 26 years old, the publication aroused interest in literary circles at the time showing a young but undeniable talent. Like Baudelaire's Les fleurs du mal, the subject matter of La Légende des Sexes includes violent love and sexual allusion. According to some historians this work influenced Apollinaire in hid composition of Calligrammes, 1918. This work was followed by L'âme nue (1885) a collection of verse in which some of the earlier poems were included, and Seul (1891). These showed Haraucout's increasing power and melancholy charm. He also wrote the romance Amis(1887); Shylock (1889) a play with incidental music by Gabriel Fauré. Shylock was performed at the Théâtre National de l'Odéon on 17 Dec 1889; Passion (1890) a drama; Héro et Léandre (1893); Aliénor an opera; Don Juan (1894); and Elisabeth (1894). He received the Academy prize for his poem, Les Vikings (1890). Haraucourt was a disciple of Leconte de Lisle founder of the so-called Parnassian school. This group of writers was named after the Symbolist journal Parnasse Contemporain in which they appeared (1866, 1869-71,1876). Associated with Baudelaire, Verlaine and Mallarmé, the Parnassians used careful versification, exact expressions, objectivity and avoided sentimentality. Their writing was a reaction to the emotional extravagances of Romanticism. Haraucourt, although his writing was a decade later, is still considered a member of this school, albiet in the Parnassian événement ie "aftermath" *Paul Eudel, born in Crotoy (Somme) on October 20, 1837 and died on November 18, 1911, was a shipowner, trader, collector and chronicler of French art.

**One of the many salacious scandals about Marie Antoinette that led to her downfall (all of them unproven) found her in her garden with her lovers drinking the champagne that they had poured over her breasts.