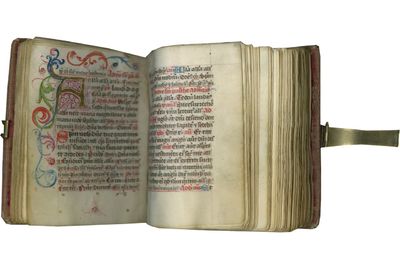 BOOK DESCRIPTION: VERY SMALL ILLUMINATED BREVIARY WITH EVIDENCE OF FEMALE OWNERSHIP OVER FIVE CENTURIES. In Latin, illuminated manuscript on parchment, Germany (Freiburg im Breisgau?), dated 1494. Dimensions 89 x 62 mm, 300 folios, complete, written in brown and red inks in a gothic textualis bookhand in a single column on 18 lines, thirteen 6- to 7-line initials in burnished gold on painted grounds with acanthus leaves in red, green and yellow in the margins, text frequently decorated with leaf motifs, line-drawn lamb in bas-de-page on f. 152v. BINDING: EARLY PINK VELVET over pasteboards, sixteenth century(?), working brass clasp and catch. TEXT: Breviaries contain the Psalms, lessons and prayers for the Divine Office, celebrated by the clergy and members of the religious orders throughout the day and night. This tiny Breviary links us directly to the daily life and religion of the nuns. PROVENANCE: Written and illuminated for a Dominican in 1494 in Germany, very likely for a Dominican nun from a well-born family at the convent of St. Maria Magdalena in Freiburg im Breisgau; dated by the scribe at the end of the text on f. 297v, "Anno domini 1494." Early changes to the liturgy, perhaps in the sixteenth century, are noted in the margins. The Prioress of St. Maria Magdalena, Maria Catharina Constia(?) added a lengthy note in German on f. 21, recording her gifting of the book in 1705; nineteenth-century printed image of St. Catherine of Siena was pasted on f. 299, suggesting that the manuscript remained in Dominican ownership until that date.CONDITION: some slight water damage to leaves at each end of the book, slight cockling throughout, lightly trimmed at top and bottom, dark spots on last few leaves, restored with new endleaves and pastedowns, in overall good condition. Full description and images available. (TM 1055) (Inventory #: TM 1055)
$45,000.00 add to cart Available from
Les Enluminures, Ltd.
Share this item
Les Enluminures, Ltd.
Offered by

Italy, Tuscany, Florence(?), c. 1440-1460
(click for more details about La Fiorita d’Italia; in Italian, decorated manuscript on parchment)
View all from this seller>