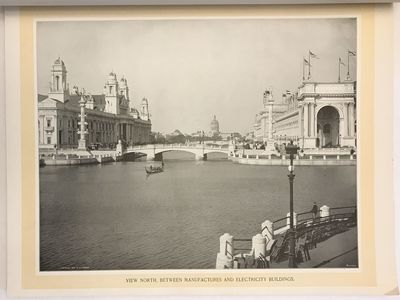 by [Salesman's Sample]. Jackson, William Henry
Chicago, 1894. About very good.. [40] leaves. Large folio. Original quarter cloth and thick paper wrappers, gilt lettered. A few small chips to wraps; rear upper corner torn away; minor wear at spine extremities. One plate with closed tear from fore-edge. Light soiling and occasional faint foxing; a few leaves with marginal dampstaining near lower corner. An apparent sample copy or salesman's dummy for the publication of W.H. Jackson's photographs of the Columbian Exposition in Chicago during 1893. Jackson was commissioned for the work by one of the chief architects of the White City, Daniel Burnham, and his official images were published in several editions and languages at the end of the 19th century. These editions all carried between sixty and eighty plates, and were usually bound in deluxe gilt boards, and are relatively uncommon, particularly in good, original condition. The present work contains one leaf of introductory text and thirty-nine plates of images within gilt card wrappers and a light cloth spine, and was evidently intended as a sample of the larger, heftier work to come. We find only one copy in OCLC whose description corresponds to that of the copy in hand, with the gilt caption title "The White City" on the front cover, located at the Canadian Centre for Architecture. A rare form of Jackson's images of the Chicago World's Fair. (Inventory #: 1367)
$675.00 add to cart Available from
McBride Rare Books
Share this item