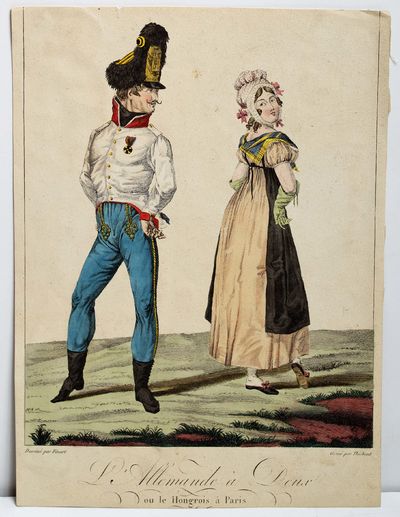 by Finart, Noël-Dieudonné (b Condé 1797 - d Paris 1852)
Finart, Noël-Dieudonné (b Condé 1797 - d Paris 1852) . L'Allemande à Deux/ou le hongrois à Paris. [Etching] Dessiné par Finart/Graveé par Thiebaut. (1815). Paris: Basset, 1815. From Les Alliés à Paris en 1815. Scènes de moeurs. A paris;chez Basset rue St jacques, no. 64. First series. Colas (1963) 1070. Etching, hand colored. 8 ½ x 11 ½" trimmed to just above the top rule; at bottom trimmed with the loss of the publisher's information. Verso shows removal from album. Colors excellent.
The publication in which this etchings appeared, Les Alliés à Paris en 1815, is composed of two suites, the first of six plates (as here); the second of eight plates. All hand colored, not numbered. The scenes represent the "galanterie" between the coalition of allied armies (Prussian, Russian and others) who were quartered until October of 1815 in the French capital. after the victory of Waterloo Various artists French and otherwise took advantage of this quartering to portray uniformed men from all over Europe. Colas notes: The etchings are very interesting for the uniforms and also for the French women's dress of the period. Colas notes that two suites are almost never found complete. In Colas' time (1933) each engraving could sell from 400 to 800 Francs. Noël-Dieudonné Finart was a painter of history, particularly of military history, Finart exhibited at the Salon since 1817 with "Champ de manoeuvres de Clignancourt". From 1833 onwards, he regularly exhibited at the Salon des scènes militaires. (Ref. Bénézit, . Lipperheide (1965), Xe214).

Only 14 etchings were done for this series. All are rare (Inventory #: 983829)
$200.00 add to cart Available from Golden Legend
Share this item
Golden Legend, Inc.
Offered by