4 b&w glossy stills from GONE WITH THE WIND 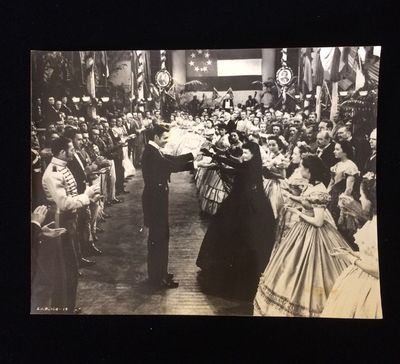 by (David Selznick, Vivien Leigh, Clark Gable, et al) (Mitchelll, Margaret)
Four movie stills, b&W "glossies", each measuring approx 9" x 7.5", without border, three of the four numbered by Selznick International Pictures (SIP), which produced the 1939 classic film, based on the phenomenal bestseller by Margaret Mitchell: the burning of Atlanta (SIP- 108 - P521); Scarlett O'Hara (Vivien Leigh) rousing her sisters and girl cousins from nap (unnumbered); Rhett Butler advising Southern plantation owners, including Ashley Wilkes (Leslie Hoiward), about the perils of war (SIP-108-89); and Scarlet and Rhett's first meeting at the soldiers ball with Scarlett still in mourning dress (SIP-108-18). The number 108 is the Gone With the Wind project number; all Selznick productons were assigned a specific number applied to photographs, costumes, etc. The stills were numbered as shooting schedule progressed. The low number 18 for the soldiers ball was one of the first shot and directed by George Cukor who weas replaced three weeks after shooting began with Victor Fleming. (Inventory #: 11626)
$250.00 add to cart or Buy Direct from
Johnnycake Books
Share this item

SHAKESPEARE'S ENGLAND: AN ACCOUNT OF THE LIFE AND MANNERS OF HIS AGE (4 volume set)

Oxford : Clarendon Press , 1917
(click for more details about SHAKESPEARE'S ENGLAND: AN ACCOUNT OF THE LIFE AND MANNERS OF HIS AGE (4 volume set))
View all from this seller>