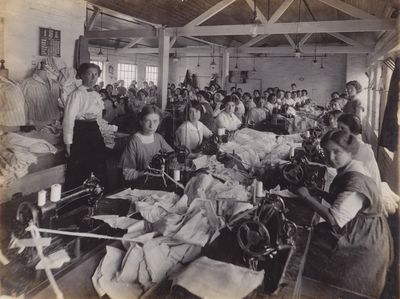 This is a corporate promotional album for Robert Church & Roberts Limited, a British clothing manufacturer. We know the company was active as early as 1888 and as late as 1918. We're able to date the photos due to one that shows a Singer Sewing wall calendar dated July 1914. Thus, many of these photos were likely taken at the cusp of a major change in labor, with many women soon shifting to work in war related industries.

The images show working conditions at factories that made women's robes, blouses, undergarments and other clothing. The firm had a factory in London at 1 to 7 Long Lane as well as another in Northampton based on the cover title. The album begins with a wonderful shot of the street frontage of a factory and there is one other external building view. Several show internal office and storage room views. The vast majority of the photos are devoted to the female employees of the firm, with 21 of them showing the women at work. Several show a room filled with boxes and clothing, with many women preparing packages; one of these show three other women alongside the packers recording data in account ledgers. Many show the women working with cloth, and there are several fantastic photos depicting rows and rows of women tightly packed at tables across from their respective sewing machines. A 1913 classified ad for the company sought "blouse and blouse robe machinists, indoor and out, also young girls as learners and finishers." At least ten photos are posed group shots of the women where it's easy to discern many who appear to be in their early teens.

An outstanding factory album depicting female garment industry workers in England just days after an assassination that would upend every aspect of their lives.

This item is offered by Langdon Manor Books, LLC, antiquarian booksellers. Please do not hesitate to contact us for additional information and/or photos and we will respond promptly. We package our items carefully, ship daily, and have a no hassle returns policy--your satisfaction is guaranteed. We are members of the Antiquarian Booksellers' Association of America (ABAA), the International League of Antiquarian Booksllers (ILAB) and the Independent Online Booksellers Association (IOBA) and adhere to their rules of ethics. (Inventory #: 3842)
$2,000.00 add to cart or Buy Direct from
Langdon Manor Books
Share this item