An Appeal on the Subject of Cholera [caption title]. 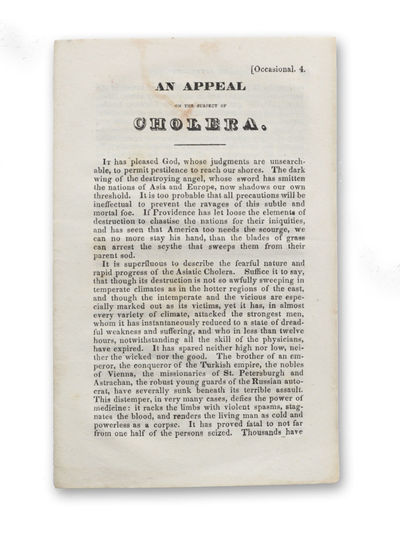 by [Anonymous].
[New York]: American Tract Society, [1832]. First edition.. Small faint stain along the upper edge of the first leaf; some light waving and toning; a very good copy.. Unbound pamphlet, 6.75 x 4.25 inches, 8 pages. Many and awful are the national sins that may have drawn down upon us this visitation. The highest privileges ever granted to a people have been by multitudes neglected and scorned. Obscene impurities, drunkenness, profaneness, and infidelity prevail among us to a fearful extent. Iniquity runs down our streets like a river." Likely the single best-known orthodox statement on the first cholera epidemic in the United States, casting it as both a judgment and an opportunity for repentance; the American Tract Society in part was making hay with President Jackson's refusal to appoint a day for a national fast, and the tract was distributed in some 160,000 copies over the course of a few weeks (Rosenberg 50). Imprint from the colophon; ast the head of the title of this tract, "Occasional. 4." Per the AAS catalog entry, "Listed as a 'new tract' in the American tract magazine (Aug., 1832), replacing 'To a guardian' as Occasional tract no. 4." See Rosenberg, Charles E. The Cholera Years: The United States in 1832, 1849, and 1866. With a New Afterword. Chicago: University of Chicago Press, 1987. OCLC (5/2020) notes six scattered holdings for this title. (Inventory #: 19734)
$150.00 add to cart or Buy Direct from
Garrett Scott, Bookseller
Share this item