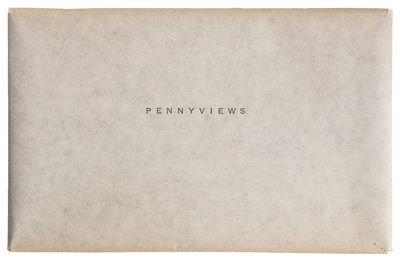 This rare artists book by Yoko Ono, who was a bibliophile, artist, and the famed wife of John Lennon, represents a historic collaboration between Ono and significant California fine press printers Harry and Sandra Reese. Ono had appeared in the previous years Santa Barbara Museum of Arts Fluxus exhibition, where she met with the printers for the first time. They began a year-long collaboration to produce Pennyviews, one of the Edition Reese series of artists books emphasizing innovative book structures. The resulting project is so named for the pages with circular, penny-shaped cutout holes which offer a glimpse of the following pages. The book was sold as a joint benefit for the Contemporary Arts Forum and the Santa Barbara Museum of Art, and continues to be a highlight of the Edition Reese imprint. (Inventory #: 5983404)
$1,100.00 add to cart Available from
Coconut Rose Books
Share this item