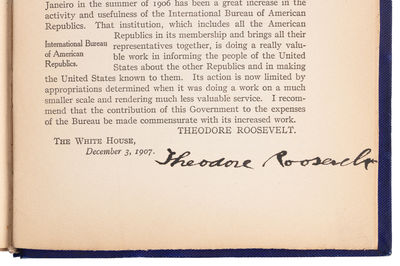 by Roosevelt, Theodore
Washington DC: Government Printing Office, 1907 . First Edition. Hardcover. Near fine. SIGNED by President Theordore Roosevelt in ink at the end of the speech on p. 63. Original blue cloth with gilt lettering to the upper cover, top edge gilt, others uncut and unopened. 9 1/2 x 6 inches (24 x 15.25 cm); 63 pp. Some toning to binding, hint of wear to extremeties, The signature is fine, dark and bold. A handsome copy.

A rare signed copy of outgoing President Theodore Roosevelt's December 1907 State of the Union address to the nation - an important work which ushered in the Progressive Era. Of note within this message are the call for labor reforms such as the eight-hour work day and compulsory investigation of strikes and lockouts (p. 21), new child labor laws (p. 23), and stringent physical fitness standards for general officers (p.49). Other topics include the establishment of the National Gallery of Art, comments on the new state of Oklahoma and the Territories of Alaska and Hawaii, as well as closing comments on China and the International Bureau of American Republics. Major addresses signed by Roosevelt as President are rare (Inventory #: 5983350)
$6,000.00 add to cart Available from
Coconut Rose Books
Share this item