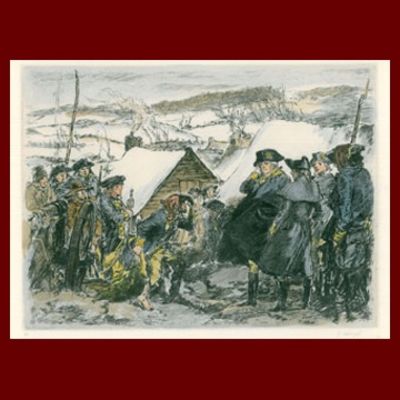 by Washington, George
Twenty artists from the early 20th Century create prints of George Washington to honor the bicentennial of his birth. This grouping was originally commissioned by private investors.
Each artist was asked to complete a piece relating to George Washington, his private and public life. Each print was signed by the respective artist at the time of issue and this entire set bears those original signatures. Included among the artists are Childe Hassam, William Auerbach-Levy, Ralph Boyer, Samuel Chamberlain, Kerr Eby, Sears Gallagher, Arthur William Heintzelman, Eugene Higgins, Earl Horter, Robert Lawson, Allen Lewis, F. Luis Mora, Robert H. Nisbet, Louis C. Rosenberg, Ernest David Roth, Albert Sterner, Walter Tittle, Levon West, J.W. Winkler, and George Wright. Despite the variety of artistic styles, the whole set works as a cohesive unit.
On laid papers, watermarks George Washington's monogram and a coat of arms, each print signed in pencil and numbered 1-20, all with full margins, loose (as issued). All approximately 10" x 15" plus extra wide margins; each placed on a rag board and shrink-wrapped. Hors-texte (illustrations printed separately from the text of a book, such as plates tipped in after binding. The phrase also refers to blank pages found at the end of a book, added to make consistently sized signatures).
All of the prints are nearly mint, with the exception of one which has some water stains.
Washington, George - Etchings. 1932 Bicentennial Pageant of George Washington. New York, The American Art Foundation, 1932. Twenty Masterpieces in Etching, being the complete set of 20 etchings, originally titled "The American Art Foundation has the honor to announce Twenty Masterpieces in Etching each executed by one of America's most distinguished artists". Requires Additional Shipping (Inventory #: WashingtonBicentennial)
$2,850.00 add to cart Available from
Abraham Lincoln Book Shop, Inc.
Share this item
Abraham Lincoln Book Shop, Inc.
Offered by