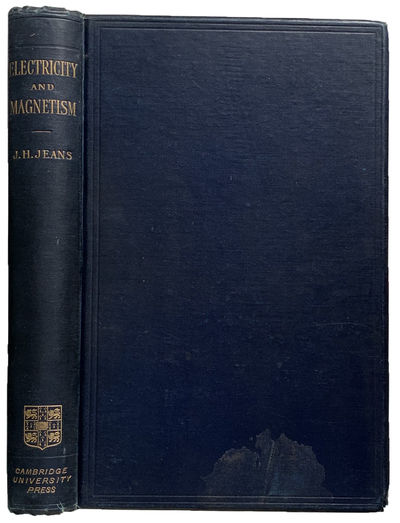 by JEANS, James Hopwood (1877-1946).
Cambridge:: Cambridge University Press, 1908., 1908. Large 8vo. vi, [2], 536 pp. Index; faint stains pp. 48-51, light offsetting from cellophane tape used for fastening Mylar cover to pastedowns. Navy blue cloth, blind double-ruled covers, gilt-stamped spine; extremities lightly worn (spine head and extremities). Ownership signature of Dr. J. M. Nuttall, with his additional signatures at p. i & v. Very good. FIRST EDITION of Jeans' textbook on electricity and magnetism. "Though trained in mathematics and physics, Sir James Hopwood Jeans was best known for his work in astronomy. Jeans was the first to suggest that matter is continually created throughout the universe and pioneered a number of ideas furthering the disciplines of astronomy and astrophysics. He also introduced the tidal theory of the origin of the solar system. A prolific writer, Jeans was the author of a number of widely read, popular books and textbooks" (Oakes, p. 371). PROVENANCE: Dr. John Mitcham Nuttall (1890-1958) was a professor of physics at the University of Manchester in the early 20th century. Nuttall was "appointed Assistant Director of Physics in 1920, [and] did some work on secondary beta-rays from X-rays" (Todd, p. 56). He worked under Ernest Rutherford. "Nuttall graduated from the University of Manchester in 1911 and was appointed Assistant Lecturer in Physics at the University of Leeds. During WWI he served as a Captain with the Royal Engineers. In 1921 he became Assistant Director of the University of Manchester's Physical Laboratories, a post he held until 1955," after which he retired (Wikipedia). References: Oakes, Elizabeth H. "Jeans, Sir James Hopwood." Encyclopedia of World Scientists. New York: 2007; Todd, Neil. Historical and Radio-Archaeological Perspectives on the Use of Radioactive Substances By Ernest Rutherford. University of Manchester: 2008. See: Ekelof p. 63. (Inventory #: SS11690)
$75.00 add to cart Available from
Jeff Weber Rare Books
Share this item