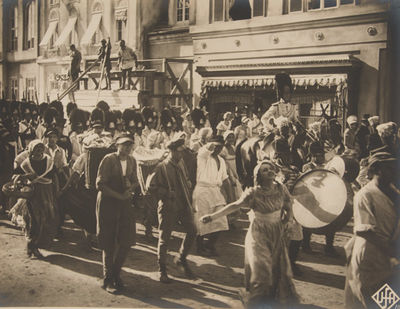 by Thiele, Wilhelm; Max de Vaucorbeil; Erik Charell; Jean Boyer (directors)
UFA, 1931. Softcover. g- to near fine. Oblong small folio. 12x15.5". Tan paper wrappers, with handwritten text in black ink on the front cover. Red on spine. Protected in glassine wrappers. A photo album containing 14 mounted silver gelatin photographs of film stills. The first six images are from the film "Le Chemin du Paradis" (1930) and the final eight images are taken from the film "Le Congres S'amuse" (1931). Each print measures 8 3/4x11" and is mounted on heavy stock paper. The album seems to have been assembled by a previous owner and a small paper slip has been bound in next to the second image, labeling the actor depicted, although the writer cannot be certain. Each image has a blank page bound in between, to protect the prints. Both of the films are French-language productions from the acclaimed German film studios UFA (and each image contains the studio's logo at the bottom right corner). Both films starred Lilian Harvey and Henri Garat. "Le Chemin du Paradis" (The Road to Paradise), released in 1930, was directed by Wilhelm Thiele and Max de Vaucorbeil, and is the French-language version of the highly successful German musical film "The Three from the Filling Station" (also directed by Thiele), having been filmed simultaneously. The other film, "Le Congres S'amuse" (The Congress is Amused), released in 1931, is a historical comedy set during the Congress of Vienna in 1815. The film has been seen as a veiled critique of the emergent Nazism in Germany. Wrappers with a few closed tears and creases. Book block has been split along the spine before the sixth image, but is held together in the glassine. A few sporadic small stains to a couple of the plates, with all images clean bright and unaffected. Wrappers in good-, all images in near fine condition. (Inventory #: 47083)
$1,500.00 add to cart or Buy Direct from
Eric Chaim Kline Bookseller
Share this item