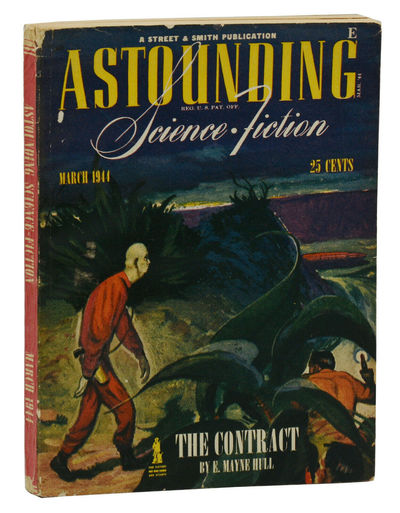 by Cartmill, Cleve
New York: Street & Smith Publications, 1944. First Edition. Very Good. First edition. Vol. XXXII, No. 1. 178 pp. Wraps. A Very Good or better copy with no fading, binding sturdy, light shelf wear, spine slightly rolled and creased, erased pencil line on table of contents page. An uncommon issue of Astounding Science Fiction containing the story "Deadline" by Cleve Cartmill. Although set on another planet, it apparently describes isotope separation and a weapon similar to the (then) top-secret atomic bomb, causing an uproar within the highest levels of the American government. According to one recent source, "the story was discussed at Los Alamos, where Edward Teller noted that Cartmill had described aspects of their research in detail." Military Intelligence enlisted Cartmill's mailman as a confidential informant. The FBI investigated the author as well (commanding him to not write about such matters) and the magazine's editor, John Campbell, and other authors connected to the magazine such as Isaac Asimov and Robert Heinlein. Rumor has it that many copies of the magazine were bought up by the government and destroyed to preserve the intense secrecy of the Manhattan Project. (Inventory #: 140939815)
$400.00 add to cart Available from
Burnside Rare Books
Share this item
Burnside Rare Books
Offered by

The Sea of Fertility: Spring Snow, Runaway Horses, The Temple of Dawn, The Decay of the Angel

New York : Alfred A. Knopf , 1974
(click for more details about The Sea of Fertility: Spring Snow, Runaway Horses, The Temple of Dawn, The Decay of the Angel)

New York : Signet Books , 1962
(click for more details about Black Like Me)
View all from this seller>