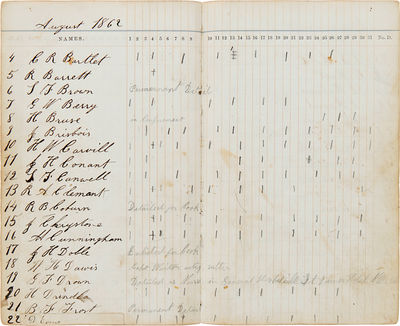 by [Civil War]: [Maine]
[Various locations, mostly Louisiana, 1862. [120]pp. Contemporary sheep, later leatherette backstrip, titles stamped in dark brown on front board, reading, "GUARD BOOK D. CO. 12th REG. MAINE." Some edge wear, mild chipping, and light scuffing to boards. Front hinge detached, spine cracked, occasional thumb-soiling to text. Still, very good. A manuscript record book documenting an entire year of guard duty worked by various members of Company D, 12th Maine Infantry Regiment Volunteers during the early part of the Civil War. The majority of time recorded in this book emanates from Louisiana, while the 12th Maine Regiment was attached to Butler's Expeditionary Corps from January to March 1862. On their way to Louisiana, the regiment travelled on the Steamship Constitution to Ship Island, Mississippi, serving there until May 4, 1862. The Regiment then traveled to New Orleans for guard duty at the U.S. Mint until October 1862. While in New Orleans, the Regiment took part in the expedition to Pass Manchaca from June 16-20 and the expedition to Ponchatoula from September 13-18. In October, the Regiment moved slightly north to Camp Parapet in Shrewsbury, Louisiana, and served there until Nov. 19, 1862; the record book ends here. Each two-page opening of the ledger is pre-printed with a large column on the left for names and thirty-one numbered smaller columns for marking days served on guard duty. Most days have just one or two tick marks for any particular soldier, indicating just one or two men were on active patrol, mostly privates, but also sergeants, corporals, musicians, wagoners, and others. The number of guard shifts worked by the regiment increased dramatically in May, 1862 when they arrived at the U.S. Mint in New Orleans, before falling off again the next month (presumably after some relief arrived). In addition to guard duty service, notations indicate reasons for absences, such as "died at," "sick," "in confinement," "permanent detail," "enlisted for cook," "light duty," "in the woods," and "hospital." Notations from February, 1862 indicate that James H. Andrews died onboard the Constitution on February 14, and two other soldiers caught sickness at Fortress Monroe. Another entry shows that S.G. Tracy "Died at Ship Island 12 of April 1862." Later, in July, Capt. H.W. Dunn is detailed for daily duty at the "Reding Press" in New Orleans. In August, G.F. Drown is "Detailed as Nurse in General Hospital St. James Hotel N.O." Material from the Trans-Mississippi West is rare this early in the Civil War, and also usually not as thorough, as the present record book documents an entire year of service. A unique record of Civil War service for a peripatetic Maine volunteer infantry regiment serving in the the Bayou State. (Inventory #: WRCAM55597)
$2,000.00 add to cart or Buy Direct from
William Reese Co. - Americana
Share this item

[SAMMELBAND OF SEVEN NORTHERN PACIFIC RAILROAD PAMPHLETS AND EXTRACTS, ASSEMBLED BY GOUVERNEUR K. WARREN, AND INCLUDING ASA WHITNEY'S EARLY CALL FOR A TRANSCONTINENTAL RAILROAD, AND PHILIP RITZ'S RARE AND IMPORTANT NARRATIVE OF TRAVELS IN THE PACIFIC NORTHWEST]

[Various locations 1869
(click for more details about [SAMMELBAND OF SEVEN NORTHERN PACIFIC RAILROAD PAMPHLETS AND EXTRACTS, ASSEMBLED BY GOUVERNEUR K. WARREN, AND INCLUDING ASA WHITNEY'S EARLY CALL FOR A TRANSCONTINENTAL RAILROAD, AND PHILIP RITZ'S RARE AND IMPORTANT NARRATIVE OF TRAVELS IN THE PACIFIC NORTHWEST])
View all from this seller>