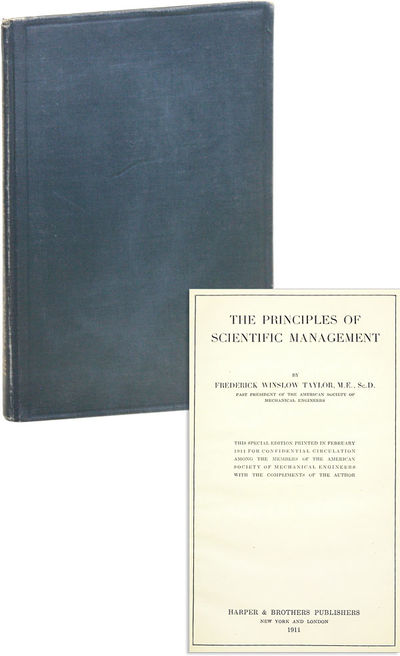 by [ECONOMICS] [SCIENTIFIC MANAGEMENT] TAYLOR, Frederick W.
New York: Harper and Brothers, 1911. First, Limited Edition. Hardcover. The foundational work of 20th-century Scientific Management. Of Taylor's influence on 20th-century business and manufacturing practices, Carter (PMM) writes: "...Taylor...besides studying factory conditions and methods in great detail...was responsible for fundamental changes in machinery and machine tools...[and] standardizing processes and machines, time and motion study, and payment by results, all of which have been welcomed in the U.S.S.R., where 'Stakhanovism' is virtuallly 'Taylorism' renamed, and in Germany where the Principles was translated and achieved a wide circulation...the adoption of his methods there contributed notably to the speedy recovery of German production after the First World War." Carter also notes that Taylor's methods, which essentially reduced human workers to impersonal units of production, "...were anathema to trade unionists almost everywhere else." Taylor's theories were directly influential in Henry Ford's development of the assembly line, and by the 1920s, "Taylorism" had been adopted in nearly every corner of American industry, even penetrating into the women's sphere with such works as Mary Pattison's Domestic Engineering (1913, see below), which offered to "Standardize and Professionalize Housework [and] Re-Organize the Home Along Scientific Management Principles." The term "efficiency expert" entered common parlance, generating much the same combination of suspicion, derision and awe as the term "tech geek" does today. Publisher's statement to title page: "Special edition printed in February 1911 for confidential circulation among the members of the American Society of Mechanical Engineers wth the Compliments of the Author." The scarce "Confidential" first printing of Frederick W. Taylor's landmark Principles of Scientific Management (PMM 403), the treatise which gave birth to the field of Time & Motion Study and upon which all subsequent studies were based. Original green panelled cloth, lettered in gilt on spine; 77pp. Ownership signature (illegible - "Henry Osby"? / Plainfield NJ - to front endpaper, dated May 1911). Mild cover soil; faint marginal stain to both rear endpapers; a tight, Very Good copy of the rare first printing. (Inventory #: 48036)
$1,750.00 add to cart or Buy Direct from
Lorne Bair Rare Books
Share this item

London : Chapman and Hall , 1887
(click for more details about The Tshi-Speaking Peoples of the Gold Coast of West Africa. Their Religion, Manners, Customs, Laws, Language, Etc.)