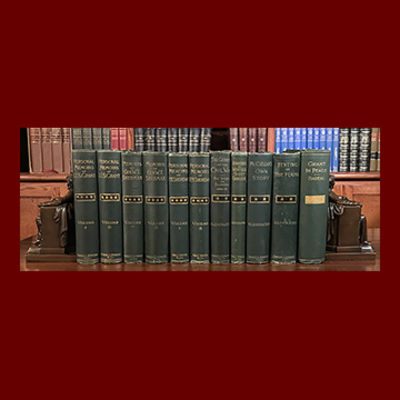 by Webster, Charles
Charles Webster. The "Shoulder Strap" Collection with Grant in Peace
A Truly Rare Set of Shoulder Straps

Charles L. Webster & Company, Mark Twain's publishing house, published the legendary "Shoulder Strap" set of books by and about Union generals. We have added on Adam Badeau's Grant in Peace.
This famous collection, originally pushed by Webster's son-in-law Samuel Clemens, has come to be known at the "Shoulder Strap" series, because of the distinct green binding featuring shoulder straps with each of the general's stars on the spine. The Hancock and Crawford volumes are the most difficult to find and are included.
A truly essential set for any student of the Civil War, being equally important. readable, and collectable!
This set includes a first edition of Adam Badeau's GRANT IN PEACE, included here because of the clear intent of the publisher to design a book that fits with their competitor's set. We feel that the inclusion of Badeau in the already truly rare full set of Webster, with shoulder straps on all volumes, makes for a one-of-a-kind set. In other words, "rare."
Light and usual overall wear on all volumes, w/ varying degrees of foxing; else very good condition for all volumes.
Webster, Charles Company. COMPLETE SET OF UNION GENERALS' MEMOIRS: Crawford, Samuel W. THE GENESIS OF THE CIVIL WAR; Custer, Elizabeth B. TENTING ON THE PLAINS, OR GENERAL CUSTER IN KANSAS AND TEXAS; Grant, U.S. PERSONAL MEMOIRS OF …, 2 vols.; Hancock, Almira R. REMINISCENCES OF WINFIELD SCOTT HANCOCK BY HIS WIFE; McClellan, George B. McCLELLAN'S OWN STORY; Sherman, William T. MEMOIRS OF…WRITTEN BY HIMSELF…, 2 vols.; Sheridan, Philip H. PERSONAL MEMOIRS OF …, 2vols. New York: 1885-92. 10 volumes total, fts., plates, illus., maps, fold. maps, facsims., fold. facsims. In addition to Badeau, Adam. GRANT IN PEACE. Philadelphia: Hubbard, 1887.

New York : The American Art Foundation , 1932
(click for more details about 1932 Bicentennial Pageant of George Washington Set of Prints)
View all from this seller>