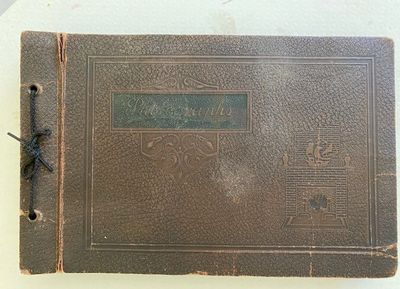 signed
by Hughes, Langston
Hughes, Langston. Harlem Renaissance Poet. Original Gelatin silver print Photo Album of Carmel and Palo Alto, California. The great poet would come to write in the home of his friend, prominent San Francisco heir Noel Sullivan, to whom Hughes dedicated his first book The Ways of White Folks. The Photo album has Brown leatherette boards, embossed with a fireplace and title "Photographs." Bound with black cord. 76 pages in all, 32 filled. The album has a total of 93 photos, including a few repeats. No captions, but a few photos dated 1932-1939. Images of Hughes are most likely from his visits to the Carmel and San Fransisco area in 1933 or 1934. Also comes with a Christmas card signed "Langston."

In 1933, in the midst of the Great Depression, Hughes took up an offer from wealthy San Francisco scion Noel Sullivan to stay in his Carmel cottage. There, Hughes enjoyed economic freedom, the artistic community, and the legendary beauty of the area. He also got to enjoy what was rare in the 1930s-a climate where white and African American artists of the progressive, Bohemian variety lived in harmony and mutual support. Hughes' associates there included poet Robinson Jeffers and his wife Una; famed muckraker Lincoln Steffens, and his wife, radical journalist Ella Winter; and photographer Edward Weston, who shot Hughes' portrait. He also made friends with the scant local African American population, including Sullivan's staff and a local car mechanic. Despite Hughes artistic success and relative ease interacting across racial lines, it was important to him never to lose touch with the black community, and especially the poor black community.

Not everyone was friendly; a socially conservative climate was taking over the formerly bohemian paradise. Toward the end of 1933, Hughes departed Carmel to stay in San Fransisco, he was in fear for his life when the carmel purchased tear gas and implemented armed drills of a "citizen's force" against potential "insurrection." In 1934, he returned to Carmel where he was met with snide newspaper articles complaining that the presence of their "distinguished" guest caused white girls to smile at him in the street. However, by the end of 1934, Hughes published his first book of short stories The Ways of White Folks" and dedicated it to his host Sullivan.

Langston Hughes appears in at least 3 photos of this album; one caught off guard and the other probably taken the next minute, smiling. He wears a windbreaker over a sweater and collared shirt. Both are toned to sepia. Both show him as he looked in the early 1930s, when he was in his early 30s. Below this photos, a somewhat later portrait of the poet has been cut from a magazine and taped in. A third photo of Hughes substantially later than the others is in somewhat faded color, shows two middle-aged men and a woman clustered together smiling against a wooden fence blocking access to a rocky coastal promontory. A tall white man hugs a black woman close, while Hughes, leans in to the couple. This photo was likely added from a later return visit to old friends in Northern California.

The majority of the photos in this album suggest it belonged to someone involved in the same bohemian artistic community of Carmel and California of which Langston Hughes was a part, as the owner seemed to mix freely with white and black communities and with rich and poor. Several photos show a grand old house with various residents and guests, and others show coastal trailside walks. Like Hughes, the person who owned this album appeared to have as close and warm a relationship with the working-class Californians as with the upper crust. Modest homes are pictured, as are the back of diners with waiters palling around. The number of richly-dressed African Americans pictured suggest the owner could have been of a singularly prosperous African American family. In several photos, an African American woman wrapped in a fur coat poses with two lapdogs in and around a car with 1928 plates. People of different races also pose together in a friendly manner with interlocked arms-Langston Hughes biographer states that Langston and his assistant would joke that the 2 of them formed the majority of African Americans in Carmel. So the Album is also picturing other northern California places, one mentioned is "Treasure Island, San Francisco" and another is "Dinah's Shack at Palo Alto".

The photos are overall in very good condition. Some have faded, but most are dark and crisp. The boards are slightly frayed, but overall tight and in good condition. A few photos appear to have been added later, into the 1940s, and the one color photo mentioned from the late 1950s to early 60s. Most have not been removed to check for identification, and almost no one is identified in the album. One photo Christmas card sending greetings from "Mac Adams" and another postcard shows ." One photo of an African American couple is identified "Treasure Island, San Francisco Calif. 1939." The direct connection to Langston Hughes early years and first book, makes this album is ripe for further research. The Album also comes with a Christmas card signed "Langston" in large green ink. (Inventory #: 16301)
$9,500.00 add to cart Available from
Share this item
Max Rambod Inc.
Offered by