Account of the Murder of the late Mr William Weare ... the coroner's inquest, the trials of the prisoners, and the execution. By George Henry Jones. 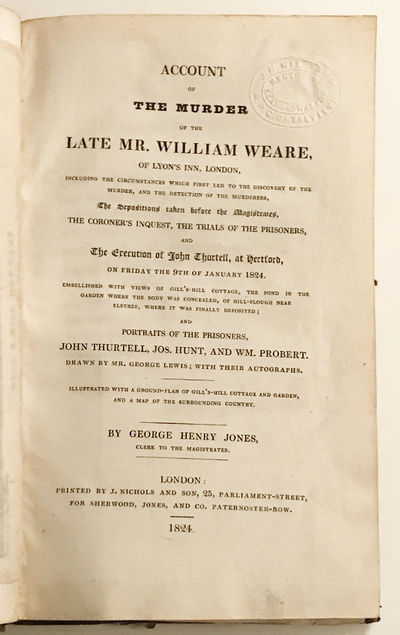 Account of the Murder of the late Mr William Weare ... the coroner's inquest, the trials of the prisoners, and the execution. By George Henry Jones.

William Weare was a solicitor of Lyon's Inn and a gambler. His killer was John Thurtell (1794–1824), a sports promoter, amateur boxer, a former Royal Marine officer and a son of the Mayor of Norwich. Thurtell owed Weare a gambling debt of £300, an immense sum at the time (equivalent to £24,500 in 2015),[1]. Thurtell believed Weare had cheated him of the money. Whatever the truth, when Weare demanded payment Thurtell murdered him rather than pay up. He invited Weare to join him and his friends – Joseph Hunt, a tavern landlord, and William Probert, a former convict and alcohol merchant – for a weekend of gambling at Probert's cottage at the site of Oaks Close off Gills Hill Lane (subsequently popularly known as Murder Lane),[2][3] Radlett. On 24 October 1823 they journeyed from London in Thurtell's horse-drawn gig, but Weare was killed in a dark lane just short of their destination. The gruesome and callous events created such public sensation that it attracted numerous ballads and theatre shows at the time along with comment by the essayist Babington Macaulay and the crime used variously in the work of Sir Walter Scott, William Hazllitt and Robert Louis Stevenson. After the trial, one of the accused was hanged and another, Joseph Hunt, was transported to Botany Bay, Australia.

Charles Joseph Hullmandel (1789–1850) studied art and printmaking, and is considered amongst the most important figures in the development of British lithography. He developed a method for reproducing gradations in tones and for creating the effect of soft color washes which enabled the reproduction of Romantic landscape paintings of the type made popular by J. M. W. Turner. Hullmandel's essay The Art of Drawing on Stone (1824) was an important handbook of lithography, issued the same year as this account of the trial. (Inventory #: BB056)
$200.00 add to cart Available from Battledore
Share this item