[A CONTRACT STEAMBOAT COMPANY DELIVERS THE MAIL FROM UP THE MISSISSIPPI FROM NEW ORLEANS]; Two letters carried by the famous Mississippi riverboats, Natchez and Princess from New Orleans cotton brokers informing the owner of a large Mississippi plantation of the status of cotton bales awaiting shipment to Europe and the state of the European cotton market 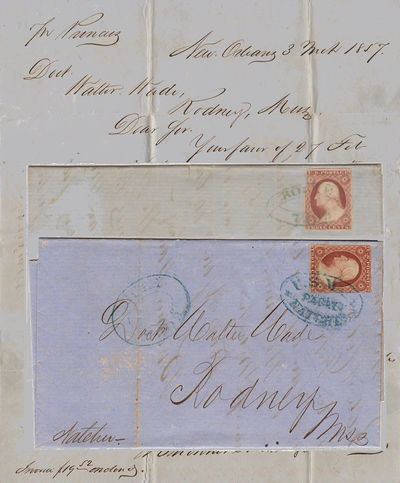 In one letter, the merchants inform Wade that they have 57 bales of cotton on-hand awaiting shipment, including 37 bales of "Rosswood" cotton. They also inform him that the latest "European News" about cotton pricing had been "favorably" received in New Orleans.

The second letter contains similar information. The letters were sent up-river from New Orleans to Wade's large cotton plantation at Rodney, Mississippi. The Natchez was commanded by Thomas Leather, who owned Contract Route 7309. The Princess was commanded by his most trusted captain, Truman C. Holmes. Leathers also employed the riverboats Capitol and R. W. McRae on the route. Together, they made three weekly round trips between New Orleans and Vicksburg. The Princess was one of the fastest boats on the river, a large and luxurious vessel featuring lavish services and four gourmet meals daily.

On February 27, 1859, the Princess carried about four hundred passengers headed south to celebrate Mardi Gras in New Orleans. Because the boat was late, it sailed under high boiler pressure after second engineer Peter Hersey declared that it would reach New Orleans on time "if he had to blow her up." At Conrad's Point, a teenage boy watching from the bank reported, "A great column of white smoke suddenly went up from her and she burst into flames." All four boilers had burst simultaneously. Hersey and as many of 200 others were killed either in the initial blast of scalding steam or the raging fire that followed when the upper cabins, staterooms, and hurricane deck collapsed. (See Feldman's U.S. Contract Mail Routes by Water. . . and Ouchley's "Steamboat Princess Disaster" online at 64 Parishes.)

Dr. Walter Wade's Rosswood Plantation at Rodney, Mississippi, a little more than 30 miles north of Natchez was a large plantation of about 1,250 acres with a 14-room Greek Revival mansion. Over 100 slaves labored in Wade's cotton fields. Today, Rodney is a ghost town, as the river changed course in 1870, and it was bypassed by the Natchez, Jackson & Columbus Railroad. (See "Rodney, Mississippi - From Prominence to Ghost Town" online at Legends of America.)

These are excellent examples of riverboat mail bearing three scarce postmarks from two famous Mississippi riverboats. At the time of this listing, Stamp Auction Network reports only five sales since 1998 for mail with the "Route / 7309" handstamp, of which just one had a manuscript, Princess, marking and one of which had a Natchez handstamp. (Inventory #: 009604)
$750.00 add to cart or Buy Direct from
Read'Em Again Books and Paper
Share this item