Panorama of the Seat of War. Birds Eye View of Virginia, Maryland, Delaware and the District of Columbia 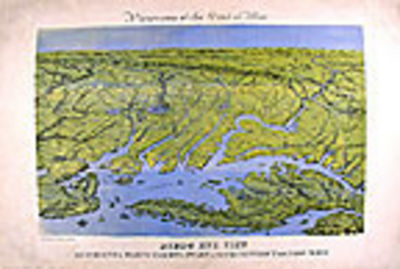 by BACHMANN, John
New York: Charles Magnus, 1864. Chromolithograph, by Bachmann. Small expert repairs to tears. Third state of this fascinating quasi-aerial view of the northernmost part of the east coast of the Confederacy, and the southernmost areas of the Union, including Washington: this third issue, printed after the smoke that was added to Manassas for the second issue had been removed again, has "many towns and battlefields ... added, especially around Richmond, Petersburg, and Fredericksburg" (Rumsey). 'At the outset of the Civil War, John Bachmann, of New York City, one of the finest American artists and lithographers specializing in bird's-eye views, began producing a series of panoramas of likely theaters of War' (Stephenson & McKee Virginia in Maps p.239). This view, taken from the apparent vantage point some miles up in the outer atmosphere, was designed to serve as an individual stand-alone image (as here), but also to join with two other views by Bachmann which together form one continuous panorama of the east coast of the Confederacy. In all, Bachmann published six views covering the whole 'Seat of the War'. The present image covers an area which includes the locations of a number of well-known Civil War actions: Harper's Ferry, Fredericksburg, Chancellorsville, Spotsylvania, Manassas, Petersburg and Appomattox River, Richmond and environs. John Bachmann was one of America's leading viewmakers, having been responsible for some of the finest New York City views. This innovative cross between view and map appears to have been his own invention, and it gives an intriguing and different perspective on the conflict. The first state of this view was published by Bachmann in 1861, the second state was published with smoke billowing up from Manassas in reference to the Battle of Bull Run; the present third edition was published by Charles Magnus in 1864, the battlefield smoke having been removed. Cf. Stephenson Civil War Maps (1989) 2 & 3 (1st and 2nd states); cf. Stephenson & McKee Virginia in Maps p.239 (2nd state); Rumsey 2817 ; cf. Reps p.160 ('No finer artist of city views worked in America than John Bachmann"). (Inventory #: 19266)
$4750.00 add to cart or Buy Direct from
Donald A. Heald Rare Books
Share this item
Donald A. Heald Rare Books
Offered by