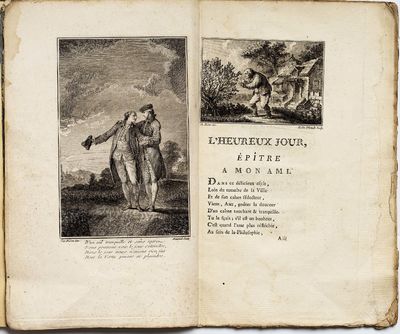 Charles Eisen, the son and pupil of Frans Eisen, he was born at Valenciennes. In 1741 he went to Paris, and in the following year entered the studio of Le Bas. His talent and his sparkling wit gained him admission to the court, where he became painter and draftsman to the King, and drawing-master to Madame de Pompadour. In 1774 he became "adjoint a Refteur." Four years earlier his name had appeared on the list of the Academie royale de Rouen as " associe titulaire." At this period Eisen was producing some of his most beautiful work; "Author, editor and publisher vied with each other to secure Eisen as illustrator of their books — Dorat and his friend de Pezay ranking among the victors in this strife for Eisen's co-operation. Who would look at Dorat's writings now, if they did not contain some of the most exquisite illustrations ever produced?" (Salomons)

Ref: Harthan, John The History of the illustrated book. The Western tradition. 1981 -Bibliography of Eighteenth Century Art and Illustrated Books: Being a Guide to Collectors of Illustrated Works in English and French of the Period. Salomons, Vera. Charles Eisen. London: Bumpus, 1914 OCLC No locations North America although Boston Museum of Fine Arts has a copy. (Inventory #: 983831)
$350.00 add to cart Available from Golden Legend
Share this item
Golden Legend, Inc.
Offered by