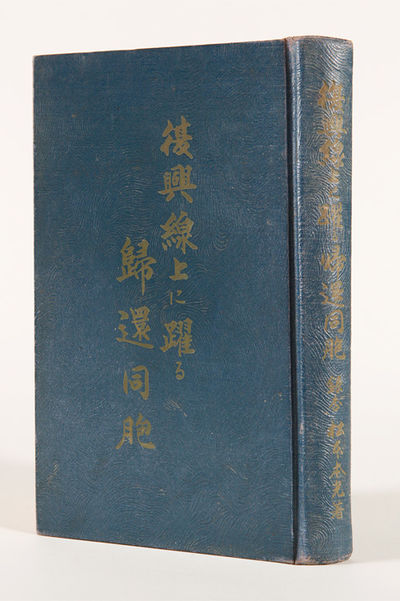 by [Japanese Americana]: Matsumoto, Motomitsu
[Los Angeles: Rafu Shoten, 1949. [8],120,336,[1]pp. Text in Japanese. Numerous illustrations from photographs. Original blue textured cloth, bound in Japanese style, gilt title on front board. Moderate wear and rubbing to boards, hinges expertly mended. Marginal dampstaining to first two sections, minor scattered foxing and toning. About very good overall. An extraordinarily-rare and significant resettlement report aimed at the Japanese-American community returning to Los Angeles after the internment period during World War II. After President Roosevelt's Executive Order 9066 was issued in February 1942, most of the 37,000 persons of Japanese ancestry living in Los Angeles were forcibly "evacuated" to various internment camps around the country under the authority of the Western Defense Command. A third of Los Angeles's Japanese community was assigned to the Manzanar Relocation Center in Owens Valley, comprising over 90% of Manzanar's prisoner population. Almost all Japanese Americans living in California lost their homes, farms, hotels, nurseries, markets, and countless other businesses when they were ordered to internment camps. The present report sought to assist those Japanese-American citizens returning to the Los Angeles area after World War II. The text is printed entirely in Japanese, except for two advertisements printed on the rear endpapers. It is divided into three main sections. The first is an eight- page introductory section. It is followed by 120 pages of photographs showing scenes from the 1942 evacuation, images both outside and inside the Manzanar camp, Los Angeles businesses formerly owned by Japanese Americans, group photographs of postwar Japanese organizations (including the 1947 class of the Pacific Sewing School and the members of the Pasadena Japanese Community Center), street-level views and interior scenes featuring post-war Japanese-owned businesses, farm and nursery views, and portraits of leading Japanese-American businesspeople. The third and longest portion of the text is devoted to a 120-page report, followed by over 200 pages of information pertaining to specific Japanese-American people, families, and businesses. This section is designed so that each page contains a small portrait of a man, woman, or family surrounded by text in Japanese. A few of the pages in this section show a building or business instead of a portrait. Advertisements are printed on the rear endpapers, one for the American National Mercantile Company. The present report and resettlement guide is similar in nature to one printed in the San Francisco Bay Area by the NICHI BEI TIMES in 1948. The title of that work is KIKAN FUKKO SHI NARABINI JUSHOROKU - NICHI BEI TIMES EVACUATION-RESETTLEMENT REPORT 1948 DIRECTORY. The NICHI BEI report encompasses much of California (including Los Angeles) and other Japanese-American communities around the United States and a few foreign countries. The present work is focused solely on the Japanese inhabitants of Los Angeles, and appears to be considerably rarer in both institutions and the market than the NICHI BEI publication. OCLC records no copies in any American libraries, and only one copy total, at Waseda University Library in Japan. They translate the title in English as RETURNING BROTHERS ON THE RECONSTRUCTION LINE. There is a separate OCLC record for a 2006 reprint published by Bunsei Shoin in Tokyo, with the alternately-translated title of RETURNED JAPANESE COMPATRIOTS IN CALIFORNIA FROM THE WAR RELOCATION AUTHORITY CAMPS. A rare and important resettlement guide for previously- interned Japanese-American Angelenos looking to reconnect with their friends and family, and to rebuild their lives and careers. OCLC 835355159. (Inventory #: WRCAM55463)
$3,750.00 add to cart or Buy Direct from
William Reese Co. - Americana
Share this item