Illustrations of the Book of Job. 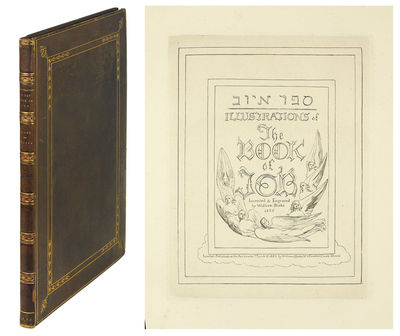 by Blake, William.
London: [plates dated] 1825 [but published 1826]. Folio, 320 x 254 mm, engraved title and 21 plates. Proofs on India paper mounted on handmade paper, some leaves (2, 5, 6, 11, 14, 17, 18) watermarked J. Whatman Turkey Mill 1825. Gilt-ruled green morocco over thick boards, fleurons at the outer corners, double-rule inner frame enclosing a bloom roll, gilt-ruled spine, sewing bands with gilt red morocco onlays, thick dark blue endleaves, all edges gilt, by Riviere: a brilliant set with no foxing at all, interleaved with blanks at the time of binding with no offsetting. Lower cover of the binding at some time tied up with string with ensuing indentation. § First edition, limited to 150 proof sets (65 sets were also printed on French paper, and 100 sets on drawing paper with the word ‘proof’ removed). This is one of finest sets of the proofs I have ever seen, and far outshines the other two original printings and the later re-issue. The India paper set is the best printing of these famous plates which comprise Blake’s major single achievement as a printmaker after the illuminated books. Illustrations of the Book of Job was Blake’s last completed prophetic book: the text, a series of biblical quotations, is above and below each image. “It was produced while Blake was still working on Jerusalem, his most obscure book; yet the illustrations are Blake’s most lucid; and they are the supreme example of his reading the Bible in its spiritual sense” (S. Foster Damon, A Blake Dictionary, p. 217). “The modest size of the central panels does not prevent them from ranking with the supreme masterpieces of graphic art” (Ray, Illustrator and the Book in England #8). Note: as always, the first plate after the title-page is misdated 1828. (Inventory #: 123190)
$89,500.00 add to cart or Buy Direct from
John Windle, Bookseller
Share this item

Shakespere: his Birthplace, Home and Grave. A Pilgrimage to Stratford-on-Avon in the Autumn of 1863.

London : Lovell
(click for more details about Shakespere: his Birthplace, Home and Grave. A Pilgrimage to Stratford-on-Avon in the Autumn of 1863.)

A New System of Music, Both Theoretical and Practical and not yet mathematical ...

London : Printed for the Autor [sic] , 1725
(click for more details about A New System of Music, Both Theoretical and Practical and not yet mathematical ...)
View all from this seller>