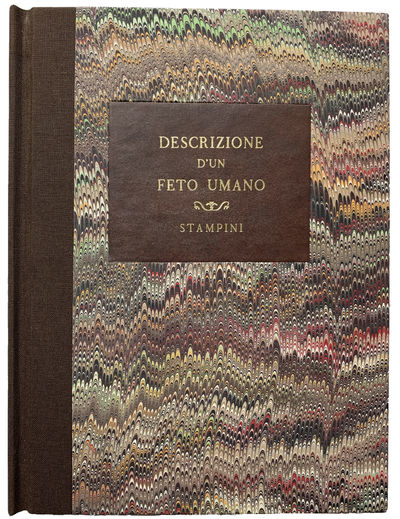 by STAMPINI, Luigi.
In Roma:: Nella stamperia di pallade, per Niccolo' e Marco Pagliarini Mercanti di Libri, e Stampatori a Pasquino, con licenza de' Superiori, 1749., 1749. 4to. 25 cm. XV, [1] pp. Title-vignette, 7 folding engraved plates, large woodcut head and tail pieces, woodcut initial letter. Modern quarter dark brown cloth, marbled boards, with large brown leather gilt-stamped label, newly sewn. Bookplate of Frederick A. Frye. Fine copy. First (and only) edition. Here, Luigi Stampini, a Bolognese surgeon, describes a case of conjoined twins with one head and two occipital bones, two spinal cords, two lungs, a conjoined stomach, and the abdominal viscera doubled. De Renzi, the Italian historian of medicine, reports that [Antoine] Portal (1742-1832) praised this work. Portal had vast experience with postmortem cases. / Conjoined twins are long present in the history of man. There is a woodcut of such a twin in the Nuremberg Chronicle (1493). / "The earliest known documented case of conjoined twin separation dates from the year 942, when a pair of conjoined twin brothers from Armenia was brought to Constantinople for medical evaluation. Leon Diakonos (950-992 AC) recalls that they had the same trunk from the armpits to the hips. Their members were proportionate and had no anomaly. When, at the age of thirty, they came back to Constantinople from where they had been chased away previously because their presence was considered a bad omen, one of the twins died suddenly. The surgeons decided to try to detach the body of the dead one. The scene is represented in a miniature of a Madrid Manuscript at the end of the 12th century, the Byzantine Chronicle of John Skylitzes (Figure 1). Apparently the initial result of the operation was successful; however, the surviving twin died three days after. / Since antiquity, and even up to recent times, these deformities were considered as monstrous and often displayed in fairs and circuses. They are described and pictured in a number of chronicles during the Middle Ages and belong to the bestiary of monsters of the famous surgeon of the Renaissance Ambroise Pare (Figure 2). He attributed the conjoined twins to an excess of semen, but he never advised to operate on them. For him, the Monsters differ from the Prodigious and the Mutilated in that they are creatures against nature and are often signs of some misfortune to come. His contemporary surgeon, Pierre Franco, however, refused to call them "monsters." They are God's creatures, and if possible they should be operated " [Montandon]. REFERENCES: Blake, NLM, p. 430; Blocker Collection, Moody Medical Library, p. 374; Salvatore De Renzi (1800-1872), Storia della medicina in Italia, (1848), p. 320; Albrecht von Haller, Bibliotheca anatomica. Qua scripta ad anatomen et physiologiam ..., v. II, p. 411; [and] Haller, Elementa physiologiae corporis humani, volume 8: Fetus Hominisque Vita, 1766, p. 313; Wellcome Library b10777428; Yale Library catalog. Not in Osler. See also: Denys Montandon, MD, THE UNSPEAKABLE HISTORY OF THORACOPAGUS TWINS' SEPARATION. ISAPS News, vol. 9, no. 3, Sept.-Dec. 2015. (does not mention this account, as this case does not apply due to the head being conjoined as well as the rest of the body, but his history is useful). (Inventory #: M13977)
$1,250.00 add to cart Available from
Jeff Weber Rare Books
Share this item