Now's the Time: A Story of Music, Education, and Advocacy 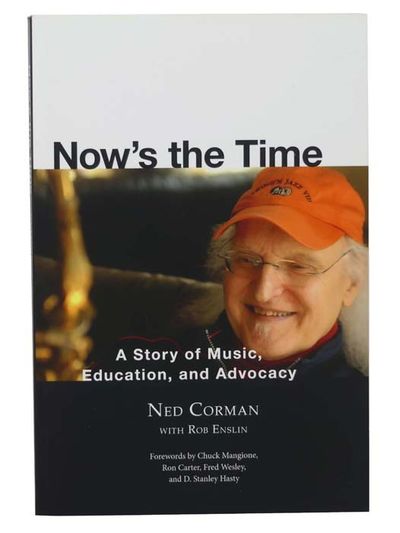 by Corman, Ned; Enslin, Rob; Mangione, Chuck; Carter, Ron; Wesley, Fred; Hasty, D. Stanley
Rhinebeck: Epigraph Books, 2012. Trade Paperback. Near Fine. Minimal wear to corners. 2012 Trade Paperback. 281 pp. "Almost everyone has a favorite teacher. For thousands of New Yorkers during the second half of the twentieth century, it was Ned Corman. With his trademark long hair and hip elocution, Ned wasn't your usual high school band director. Nor was he a card-carrying hippie. Students gravitated to him, and he dug them right back. Along the way, some great music was made. Ned has always lived in parallel universes. After graduating from the world-famous Eastman School of Music and later Penn State, he went on the road with Chuck Mangione, Fred Waring, and a touring production of Half of Sixpence, as well as co-led a rock-and-roll 'horn band.' Ned also worked the classical side of the tracks, spending forty years with the Rochester Philharmonic Orchestra as an 'extra' and a sometime soloist, doing pit work, and teaching privately. More often than not, he was as good as his last job. While teaching music in the Rochester suburb of Penfield, Ned saw the creative possibilities of getting students together with professional musicians. He launched the Penfield Music Commission Project, followed by The Commission Project. The impact of these projects led to his involvement with Swing 'n Jazz, the Xerox Rochester International Jazz Festival, Rochester Independent Music Festival, and Greentopia. Both an autobiography and part 'how-to' manual for aspiring arts leaders, Now (Inventory #: 2303761)
$15.00 add to cart or Buy Direct from
Yesterday's Muse
Share this item
Yesterday's Muse, Inc.
Offered by

1881
(click for more details about The Princeton Directory, Containing a General Directory of the Citizens, and Place of Residence, Business Directory, Calendar, Town Officers, Churches and Secret Orders. Number 1 - 1881 [Massachusetts])

New York : Alfred A. Knopf , 1960
(click for more details about Rabbit, Run)
View all from this seller>