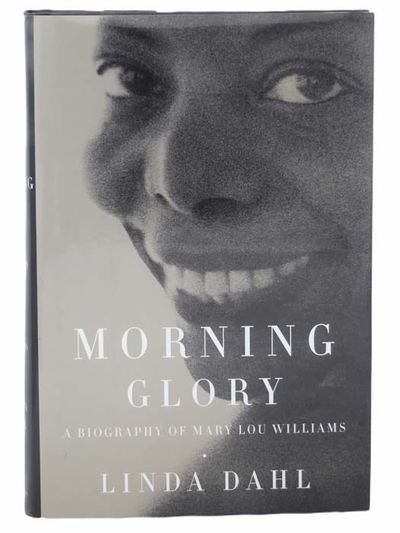 by Dahl, Linda
New York: Pantheon Books, 2000. First Edition. Hard Cover. Near Fine/Near Fine. First edition. 2000 Hard Cover. viii, 463 pp. "Mary Lou Williams -- pianist, arranger, composer, and probably the most influential woman in the history of jazz -- receives the attention she has long deserved in the definitive biography by a leading scholar of women in jazz. The illegitimate child of an impoverished and indifferent mother, Williams began performing publicly at the age of seven when she became known admiringly in her native Pittsburgh as "the little piano girl of East Liberty," playing one day for the Mellons at bridge teas and the next in gambling dens where the hat was passed for change. She grew up with the jazz of the early part of the century, championed by the likes of Earl Hines and Fats Waller, yet unlike so many other musicians of her time, she was open to new forms in jazz -- she was an early champion of bop, and a mentor and colleague to its central figures, such as Thelonius Monk and Bud Powell -- and in broader musical styles as well (after her conversion to Catholicism, she wrote masses and other sacred music). Most of the other famous women in jazz -- Billie Holiday, Ella Fitzgerald -- have been singers. Williams was instead a phenomenal pianist who performed solo, with small groups and big bands, in vaudeville and clubs, and on numerous records. But she is equally well known today as a composer and arranger of remarkable versatility and power, having worked with, among others, Duke Ellington and Benny Goodman. Her compositions have been recorded by artisits as varied as Marian McPartland, Dizzy Gillespie, Nat "King" Cole, Sarah Vaughan, Ella Fitzgerald, and herself -- and, more recently, by cutting-edge players Geri Allen and Dave Douglas. But Williams was more than "just a musician"; her interests were catholic in both senses, and she struggled to combine her love of music with her love of God. She was a tireless humanitarian, and made ongoing attempts to help dozens of down-and-out musicians; in the 1950s, her apartment was, at times, virtually a rehab. Though she was often in emotional despair, she found comfort for her many disappointments and hurts not only in her music but in her spirituality. Linda Dahl, granted unprecedented access to the large Williams archive, has given us the whole of Williams's very full life, from her often harrowing days on the road to her tumultuous marriages and love affairs, from the ups and downs of her unique fifty-year career to the remarkable spirituality that came to inform both her daily life and her music. This is a striking portrait of one of our least understood and most important musicians. (Inventory #: 2303740)
$35.00 add to cart or Buy Direct from
Yesterday's Muse
Share this item
Yesterday's Muse, Inc.
Offered by

1881
(click for more details about The Princeton Directory, Containing a General Directory of the Citizens, and Place of Residence, Business Directory, Calendar, Town Officers, Churches and Secret Orders. Number 1 - 1881)

New York : Alfred A. Knopf , 1960
(click for more details about Rabbit, Run)
View all from this seller>