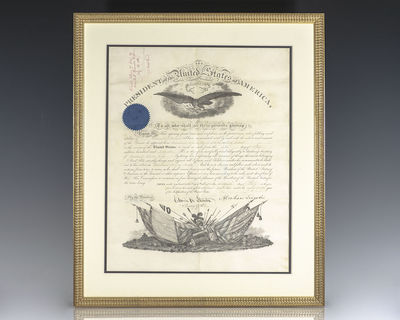 by Lincoln, Abraham; Edwin M. Stanton; Edward Griffin Beckwith
July 5, 1862. Rare military commission boldly signed by Abraham Lincoln as President July 5, 1862 and countersigned by Secretary of War Edwin M. Stanton. One page, partially printed with engraved vignettes and retaining the original blue paper seal, the commission appoints Edward G. Beckwith as Additional Aide-de-Camp with the rank of Colonel. In fine condition. Double matted and framed. The entire piece measures 24 inches by 21 inches. Accompanied by a later appointment letter dated August 1, 1865 on Stanton's War Department letterhead appointing Beckwith "for distinguished services in the Subsistence Department during the War, a Lieutenant Colonel by Brevet" and singed by Stanton at the conclusion. With the original transmittal envelope. Edward Griffin Beckwith served in the Mexican-American War, the American Civil War, and played a large role in the Pacific Railroad Survey from 1853 to 1857. The First Transcontinental Railroad followed his recommended route. An exceptional example with noted provenance. Abraham Lincoln served as the 16th President of the United States from March 1861 until his assassination in April 1865. He led the United States through its Civil War, and in doing so preserved the Union of the United States of America, abolished slavery, and strengthened the federal government. Lincoln began constructing his cabinet on election night and sought to create a cabinet that would unite the Republican party. His eventual cabinet would include his primary rivals for the Republican nomination and although his appointees held differing views on economic issues all were opposed to the expansion of slavery into the territories of the United States. The most senior cabinet post of Secretary of State was appointed to William Seward who had recently failed to win the 1860 Republican presidential nomination and Lincoln's choice for Secretary of the Treasury was Ohio Senator Salmon P. Chase, Seward's primary political rival and the leader of a radical faction of the Republican party that sought the immediate abolition of slavery. (Inventory #: 115978)
$12,800.00 add to cart or Buy Direct from
Raptis Rare Books
Share this item