The Guns of August. 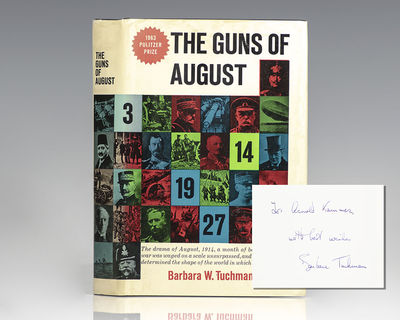 by Tuchman, Barbara W
New York: Macmillan, 1962. Early printing of Tuchman's Pulitzer Prize-winning account of the opening episodes of World War I. Octavo, original black cloth, cartographic endpapers, illustrated. Association copy, inscribed by the author to fellow historian Arnold Krammer opposite the half-title page, "For Arnold Krammer with best wishes Barbara Tuchman." The recipient, Arnold Krammer was a historian who specialized in German and United States history and a professor at Texas A&M University in College Station, Texas. He was twice a Fulbright scholar in Germany in 1992-1993 and 2002-2003. He was the author of seven books, the most recent of which was War Crimes, Genocide, and the Law: Historical Perspective, published in 2009. He is a co-author of five other books and has penned scores of historical articles and book reviews in various learned journals, such as The Journal of Contemporary History, Slavic Review, The Russian Review, German Studies Review and Journal of Military History. Fine in a near fine dust jacket. Jacket design by Ellen Raskin. An excellent association. More dramatic than fiction... The Guns of August is a magnificent narrative--beautifully organized, elegantly phrased, skillfully paced and sustained... The product of painstaking and sophisticated research" (Chicago Tribune). An immediate bestseller, Tuchman's celebrated history of World War I won the Pulitzer Prize for non-fiction. It also served as the basis for the critically acclaimed 1964 documentary compiled from archival footage by Nathan Kroll. Listed by Modern Library as one of the greatest English-language nonfiction books of the 20th century. (Inventory #: 115379)
$2,000.00 add to cart or Buy Direct from
Raptis Rare Books
Share this item