Exodus: A Novel of Israel. 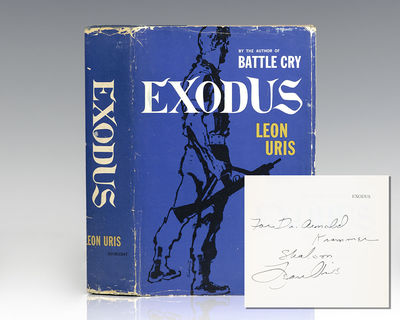 by Uris, Leon
New York: Doubleday & Company, Inc, 1958. First edition, early printing of the author's magnum opus. Octavo, original half cloth, cartographic endpapers. Association copy, inscribed by the author on the half-title page to historian Arnold Krammer, "For Dr. Arnold Krammer Shalom Leon Uris." The recipient, Arnold Krammer was a historian who specialized in German and United States history and a professor at Texas A&M University in College Station, Texas. He was twice a Fulbright scholar in Germany in 1992-1993 and 2002-2003. He was the author of seven books, the most recent of which was War Crimes, Genocide, and the Law: Historical Perspective, published in 2009. He is a co-author of five other books and has penned scores of historical articles and book reviews in various learned journals, such as The Journal of Contemporary History, Slavic Review, The Russian Review, German Studies Review and Journal of Military History. Near fine in a very good price-clipped dust jacket with some rubbing to the extremities. Jacket design by Sydney Butchkes. Jacket drawing by Harlan Krakowitz. An excellent association. Exodus is an international publishing phenomenon--the towering novel of the twentieth century's most dramatic geopolitical event. Leon Uris magnificently portrays the birth of a new nation in the midst of enemies--the beginning of an earthshaking struggle for power. "Passionate summary of the inhuman treatment of the Jewish people in Europe, of the exodus in the nineteenth and twentieth centuries to Palestine, and of the triumphant founding of the new Israel" (The New York Times). (Inventory #: 115423)
$1,100.00 add to cart or Buy Direct from
Raptis Rare Books
Share this item