Beyond Giving, The Green Sailed Vessel, Timeless Meeting, and At The Gate. 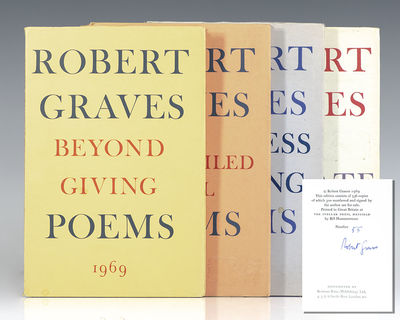 by Graves, Robert
London: Privately Printed at the Stellar Press, 1969-1974. Signed limited editions of four volumes of Graves' collected verse, written between 1969 and 1974. Octavo, four volumes, original stiff paper wrappers. Each volume is one of 500 numbered copies signed by Robert Graves. In near fine condition. An attractive collection. British poet and historical novelist Robert Graves published nearly 60 poetry anthologies in addition to many popular historical novels. The present collection contains many of his best known poems written between 1969 and 1971, including Song: To a Rose, In the Nature of Virtue, The Green-Sailed Vessel, Where is Truth, and Love and Lovelessness. (Inventory #: 115104)
$475.00 add to cart or Buy Direct from
Raptis Rare Books
Share this item