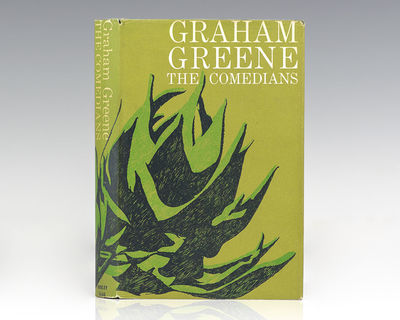 by Greene, Graham
London: The Bodley Head, 1966. First edition of this novel set in Haiti under the rule of "Papa Doc" Duvalier, which explores the political suppression and terrorism through the figure of an English hotel owner, Brown. Octavo, original green cloth. Near fine in a near fine dust jacket with light rubbing. Jacket design by Ivan Lapper. One of Greene's most chilling and prophetic novels, The Comedians is set in a Haiti ruled by Papa Doc and the Tontons Macoute, his sinister secret police. Just as The Quiet American offered a preview of the coming horrors of American involvement in Vietnam, this novel presages the chaos in Haiti. "Graham Greene arouses responses of curiosity and attention comparable to those set up by Malraux... Faulkner and Hemingway" (New Statesman). It is the basis for the 1967 film starring Richard Burton, Elizabeth Taylor, Alec Guinness, Peter Ustinov, James Earl Jones, Cicely Tyson, Paul Ford and Lillian Gish. (Inventory #: 115681)
$80.00 add to cart or Buy Direct from
Raptis Rare Books
Share this item