A Prophet in His Own Country: The Triumphs and Defeats of Adlai E. Stevenson. 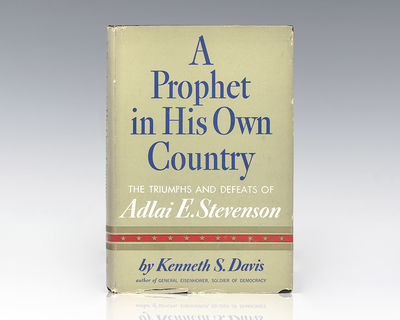 by Davis, Kenneth S. [Adlai E. Stevenson]
Garden City, New York: Doubleday & Company, Inc, 1957. First edition of Davis' definitive biography of Adlai E. Stevenson. Octavo, original cloth. Signed by both Kenneth S. Davis and Adlai Stevenson on the second free endpaper. Near fine in a very good dust jacket. Jacket desgin by Sydney Butchkes. Jacket photograph by Arthur Siegel. The grandson of former Vice-President Adlai E. Stevenson, Adlai E. Stevenson II came from a distinguished family in Illinois and was well known as a gifted orator, intellectual, and political moderate. In writing A Prophet in His Own Word, biographer Kenneth Davis was given access to Stevenson's personal diary and spent hours on his subject's farm speaking to him and his close associates, past and present. In this definitive biography, none of the major influences on Stevenson's developing character have been overlooked, setting down a brilliant picture of the man who, though twice defeated for the presidency, had a truly great influence on American policy. (Inventory #: 115063)
$100.00 add to cart or Buy Direct from
Raptis Rare Books
Share this item