Marlborough: His Life and Times. 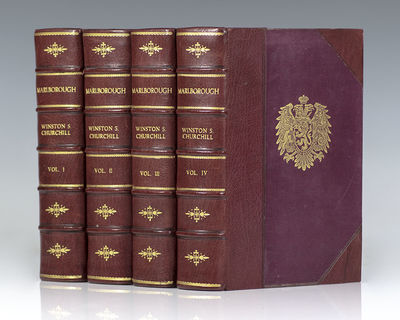 by Churchill, Winston S
London: George G. Harrap & Company, 1933-38. First editions of each volume of this important biography. Octavo, 4 volumes, bound three quarters morocco, Marlborough armorial crests stamped in gilt on the front panels of each volume, gilt titles and tooling to the spine, raised bands, marbled endpapers, top edge gilt, with hundreds of maps and plans (many folding), plates and document facsimiles. In near fine condition. John Churchill, the Duke of Marlborough (1644-1722), was one of the greatest military commanders and statesmen in the history of England. Victorious in the Battles of Blenheim, Ramillies, and countless other campaigns, Marlborough, whose political intrigues were almost as legendary as his military skill, never fought a battle he didn't win. Although he helped James II crush the rebellion of the Duke of Monmouth, Marlborough later supported William of Orange against James II in the Glorious Revolution of 1688 and brilliantly managed England's diplomatic triumphs during the War of the Spanish Succession. "The greatest historical work written in our century, an inexhaustible mine of political wisdom and understanding, which should be required reading for every student of political science." - Leo Strauss, University of Chicago "Rarely in the history of historical writing have author and subject seemed so made for each other" (Henry Steele Commager). "Though it was a commissioned work, Churchill would not have invested nearly a million words and ten years had it not had special significance for him. For he wrote about a man who was not only his ancestor, an invincible general, the first of what became the Spencer-Churchill dukes of Marlborough, and a maker of modern Britain, but also a supreme example of heroism in the two vocations which mainly interested Churchill and in which ultimate triumph seemed to have eluded him-- politics and war making" (Wiedhorn, 110). "It may be his greatest book. To understand the Churchill of the Second World War, the majestic blending of his commanding English with historical precedent, one has to read Marlborough. Only in its pages can one glean an understanding of the root of the speeches which inspired Britain to stand when she had little to stand with" (Langworth, 164). (Inventory #: 115628)
$2,500.00 add to cart or Buy Direct from
Raptis Rare Books
Share this item