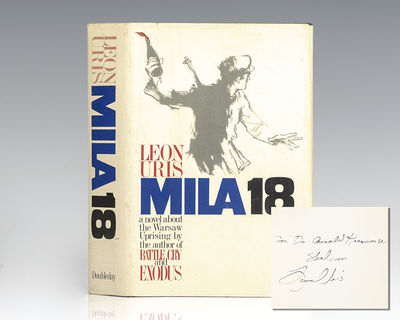 by Uris, Leon
Garden City, NY: Doubleday & Company, 1961. First edition of Uris' classic novel about the Warsaw Uprising. Octavo, original cloth. Association copy, inscribed by the author to historian Arnold Krammer on the front free endpaper, "For D. Arnold Krammer Shalom Leon Uris." The recipient, Arnold Krammer was a historian who specialized in German and United States history and a professor at Texas A&M University in College Station, Texas. He was twice a Fulbright scholar in Germany in 1992-1993 and 2002-2003. He was the author of seven books, the most recent of which was War Crimes, Genocide, and the Law: Historical Perspective, published in 2009. He is a co-author of five other books and has penned scores of historical articles and book reviews in various learned journals, such as The Journal of Contemporary History, Slavic Review, The Russian Review, German Studies Review and Journal of Military History. Fine in a near fine price-clipped dust jacket. Jacket drawing by Harlan Krakowitz. Jacket design by Al Nagy. Mila 18 is a novel by Leon Uris set in German-occupied Warsaw, Poland, before and during World War II. Mila 18 debuted at #7 on The New York Times Best Seller List (the second-highest debut of any Uris novel ever, bested only by the #6 debut of Trinity in 1976) and peaked at #2 in August 1961.[1] Leon Uris's work, based on real events, covers the Nazi occupation of Poland and the atrocities of systematically dehumanising and eliminating the Jewish people of Poland. The name "Mila 18" is taken from the headquarters bunker of Jewish resistance fighters underneath the building at ulica Mila 18 (18 Mila Street, in English, 18 Pleasant Street). (See Mila 18.) The term ghetto takes on a clearer meaning as the courageous Jewish leaders fight a losing battle against not only the Nazis and their henchmen, but also profiteers and collaborators among themselves. Eventually, as the ghetto is reduced to rubble, a few courageous individuals with few weapons and no outside help assume command of ghetto defense, form a makeshift army and make a stand. (Inventory #: 115197)
$475.00 add to cart or Buy Direct from
Raptis Rare Books
Share this item