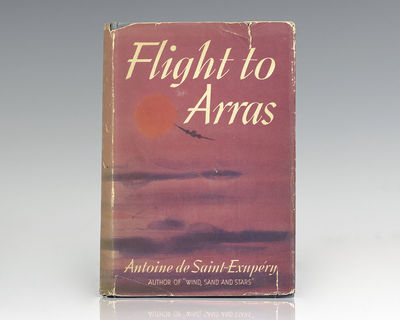 by Saint-Exupery, Antoine de
New York: Reynal & Hitchcock, 1942. First edition of this classic memoir. Octavo, original cloth, illustrated endpapers. Near fine in a very good dust jacket. Illustrated by Bernard Lamotte. Translated from the French by Lewis Galantiere. Based on one of Saint-Exupery's 1940 reconnaissance missions, "Arras is a deeply personal book... Conceived as a volume on the fall of France, Flight to Arras was a war book by the time it was published. It won raves on both counts. It was universally thought to dwarf all other accounts of the French defeat; writing in the Atlantic Edward Weeks declared, 'This narrative and Churchill's speeches stand as the best answer the democracies have yet found to Mein Kampf" (Schiff, 363). (Inventory #: 115467)
$175.00 add to cart or Buy Direct from
Raptis Rare Books
Share this item