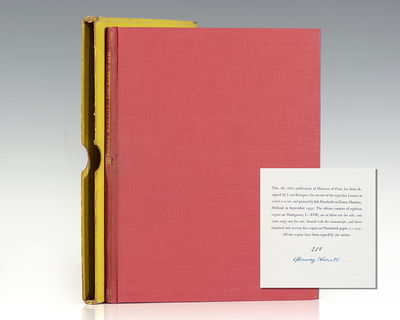 by Wescott, Glenway
Harrison of Paris, 1930. Signed limited edition of Glenway Wescott's short novel. Octavo, original cloth. One of 375 numbered copies signed by the author, this is number 252. Near fine in the original slipcase. A figure of the American expatriate literary community in Paris during the 1920s, Glenway Wescott began his writing career as a poet, but is best known for his short stories and novels, notably The Grandmothers (1927), which received the Harper Novel prize, and The Pilgrim Hawk (1940). (Inventory #: 115108)
$150.00 add to cart or Buy Direct from
Raptis Rare Books
Share this item