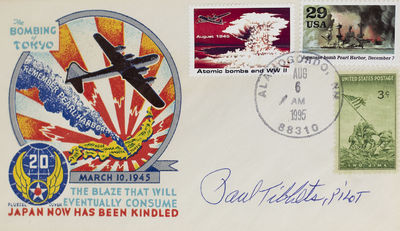 signed first edition
by Tibbets, Paul
Rare first day cover featuring three stamps commemorating the conclusion of WWII. Color illustrated envelope with a vignette of the bombing of Tokyo, the envelope features three stamps illustrating the raising of the flag at Iwo Jima, the bombing of Pearl Harbor, and the atomic-boming of Hiroshima. Signed by Paul Tibbets, the pilot of the Enola Gay on the front panel. After protests from Japanese government officials and intervention by President Bill Clinton, the United States Postal Service rescinded the third stamp "Atomic bombs end WWII" and a commemorative poster stamp was created in its place. This was the only commemorative stamp ever rescinded by the United States Postal Service. In near fine condition. Named after Enola Gay Tibbets, the mother of pilot and aircraft commander Colonel Paul Tibbets, the Enola Gay became the first aircraft to drop an atomic weapon with the release of "Little Boy" on the city of Hiroshima on August 6th, 1945. The bomb resulted in the near complete destruction of the city, causing an estimated 160,000 immediate civilian casualties and thousands of subsequent deaths associated with radiation, starvation, and dehydration. (Inventory #: 115931)
$175.00 add to cart or Buy Direct from
Raptis Rare Books
Share this item