An Essay upon Vocal Musick, Wherein is amply and clearly demonstrated by Rule and Example whatever is necessary for the Attainment to the true and perfect Knowledge of that Science. Set forth by way of Dialogue, And intended for the Use and Benefit of altrue Lovers of divine Musick 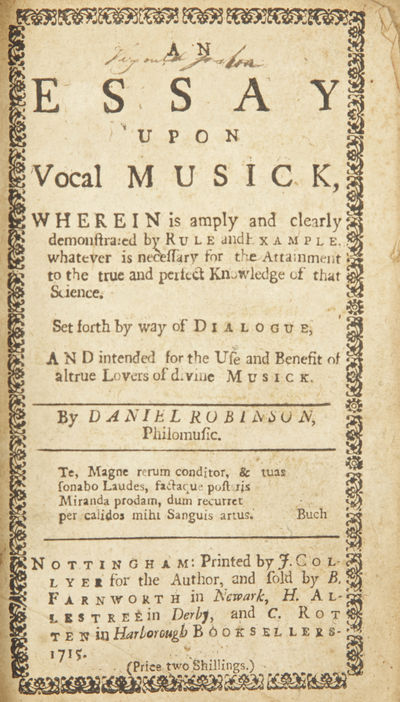 by ROBINSON, Daniel
Nottingham: Printed by J. Collyer for the Author, and sold by B. Farnworth in Newark, H. Allestree in Derby, and C. Rotten in Harborough Booksellers 1715 (Price two Shillings.), 1715. Octavo. Full dark brown contemporary leather with blindstamped edges, spine with titling and date gilt. 1f. (recto title, verso blank), 1f. (dedication to John Throckmorton), 1f. ("The Preface"), 1f. ("The Contets[!]" and "Errata"), 150 pp. With decorative typeset head- and tailpieces, a woodcut initial, and diagrams. Music typeset. With the following chapters: Of the Gamut; Of Time; Of tuning the Voice; Of the several Keys in Musick; Of the Nature and use of Flats and Sharps, and of the Semitones belonging to an Octave; of the several sorts of Keys, having Flats or Sharps; Of shifting the Mi, and of Transposition." With "Psalm Tunes": St. Ann's; Bristol; Cambridge; Canterbury; St. Davids; Glocester; St. James's; Jersey; Litchfield; London: London new; St. Lukes; Manchester; St. Maries; St Martins; St. Matthews; Norwick; Southwel; Westminster; Windsor; and York and "Proper Tunes" to psalms 3, 18, 21, 30, 41, 50, 68, 81, 100, 112, 113, 119, 124, 125, 132, 148, III a new Tune, 67, 8 hymns and 9 anthems, all with both music and text. With later bookplate of John Albree to front pastedown; signature of Charles [ ... ] [?]Dashword to verso of front free endpaper and [?]signature to upper portion of title. Binding somewhat worn, rubbed, bumped, and warped; joints splitting; rebacked; front free endpaper worn, soiled, and browned, others lacking. Slightly worn; uniformly browned; upper margins of some leaves slightly trimmed, not affecting text; several small chips to outer edge of title. Lacking final 4 pages containing conclusion of Hymn VIII and all of Hymn IX. Not in Gregory-Bartlett, Cortot, or Hirsch. RISM BVI p. 708 (3 apparently complete copies in the U.K., 4 in the U.S.). "In the late sixteenth and seventeenth centuries, music theorists distinguished between two vocal registers: the lower chest voice and the falsetto. The term "feign" seems to have been used interchangeably with the term falsetto ... Daniel Robinson's An Essay upon Vocal Musick gives some insight into the vocal reach implied by 'feigning' when he confesses his confusion over the limits of the conventional scale by noting that most singers he knows 'can reach the Compass of fourteen or fifteen Notes, without feigning their Voices.' " Larson: The Matter of Song in Early Modern England, p. 133. A very early Nottingham imprint. (Inventory #: 34215)
$715.00 add to cart or Buy Direct from
J. & J. Lubrano Music Antiquarians
Share this item