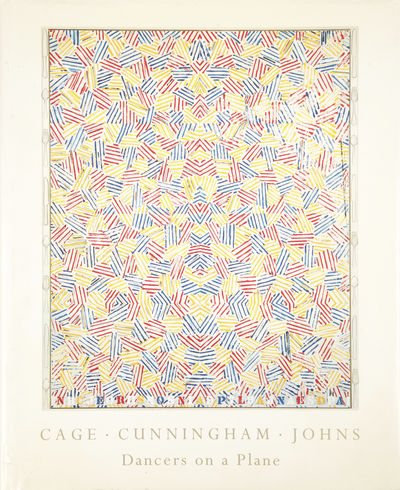 by CAGE, John 1912-1992
New York: Alfred A. Knopf in association with Anthony d'Offay Gallery, 1990. Quarto. Full yellow cloth with titling blindstamped to upper and in silver to spine. 1f. (recto publisher's device, verso blank), 1f. (recto half-title, verso frontispiece photographic illustration of Cage, Cunningham, and Johns), 1f. (recto title, verso copyright), 1f. (recto contents, verso colour illustration), 9-166 pp. In dustjacket, with reproduction of a Johns painting in colour to upper and photograph of the triumvirate to lower). Signed in full by Cage (dated "July 30 '91"), Cunningham (dated "VII / 30 / 91" and Johns (dated "21 May 91") on free front endpaper. Contents: - Susan Sontag In Memory of Their Feelings - Introduction by Richard Francis - John Cage Solo for Piano from the Concert for Piano and Orchestra 1957-58 - Points in Space by David Sylvester - Merce Cunningham Photographs 1940-1981 - Merce Cunningham by David Vaughan - Jasper Johns Paintings and Drawings 1979-1982 - Dancers on a Plane and other Stratagems for Inclusion in the Work of Jasper Johns by Mark Rosenthal - The Fabric of Friendship Jasper Johns in conversation with David Vaughan - Chronologies - Works in the Exhibition With numerous reproductions of Cage's paintings, drawings, and manuscript of his Concert for Piano and Orchestra; photographs of Cunningham and his dancers, etc.; 15 full-colour reproductions of John's paintings and drawings (including 2 folding); commentary by Susan Sontag; and essays by David Sylvester (on Cage), David Vaughan (on Cunningham), and Mark Rosenthal (on Johns). Dustjacket slightly worn. Based on an exhibition at the Anthony d'Offay Gallery in London in 1989. Cage was "one of the leading figures of the postwar avant garde. The influence of his compositions, writings and personality has been felt by a wide range of composers around the world. He had a greater impact on music in the 20th century than any other American composer." James Pritchett, Laura Kuhn and Charles Hiroshi Garrett in Grove Music Online. (Inventory #: 34084)
$935.00 add to cart or Buy Direct from
J. & J. Lubrano Music Antiquarians
Share this item