A single woman manages the family household, documenting its activities across five years 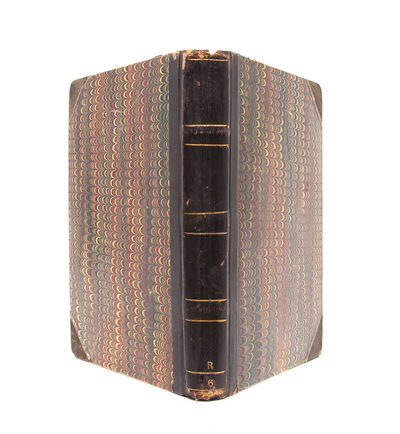 by [Women's Social History] Amanda L. Rockefeller
Glenco Mills, New York, 1885. Quarter sheep over marbled boards, measuring 8 x 10 inches with scuffing to extremities. Ownership signature of Amanda L. Rockefeller, Glenco New York to the front endpaper. Comprised of 354 densely written pages documenting the daily comings-and-goings at her father Jonas W. Rockefeller's house, where she would eventually take over the duties of hostess following her mother Jane's death ten years later. Census records for Glenco show that by 1910, she remained single and had even taken over as head over household following her father's death. But in the period documented in the present caller diary, Amanda was in her mid 20s, learning how to schedule the family's social calendar, manage relationships with tradesmen, and document major life events in her community. At the time of Amanda's diary, the hamlet of Glenco Mills "contained a good flouring mill, saw-mill, several large shops, a neat chapel of the Methodist Church, and about eighty inhabitants" including a sheriff, deputy, postmaster, and practicing physician (Ellis, 1878). The Rockefeller family owned land and ran a thriving household. Amanda's social diary is rich with information about local inhabitants' visits -- including numerous single and married women coming to share news, exchange sewing and knitting, and generally keep her company. Many names, including Anne E. Moffat, Lizzie Haynor, and Kate Hofner are regulars to the house and appear to live close by. Others, Amanda marks with the place of their residence (New York, Dryden, and towns in Virginia and Ohio are common); these give a sense of how relationships might spread geographically through Jonas' business and trading, through women in the family marrying and moving to new locales, and through travel to resorts or tourist destinations. Designations of visitors with or without married and professional titles give insight into the intimacy or formality of the calls. And the constant daily cycle of people coming through the Rockefeller household signals that Amanda's home was a hub of social life for the town. Amanda is diligent, documenting not only friends and callers coming through each day, but also tradesmen and laborours. On a regular basis, men call for her father on business. In general it's also clear that the house and property require regular maintenance; but a rush of visitors labeled as masons, carpenters, drapers, tinners, and painters in 1885 suggest major overhauls to the home. In each case, their names and jobs are listed. Further research could be done into the nature of such renovations and the economic impact it had locally. In this sense, her lists give readers an indirect sense of where her family fits within the wider community -- suggesting that her family was quite prominent and successful (we have been unable to find a direct connection to the John D. Rockefellers). Closely tied to those around her, Amanda also documents communal losses. "Died in Green Port of typhoid pneumonia, Peter Hoffman sick 3 days, aged 82" she reports on March 15, 1883. "Died in Hudson of scarlet fever, Maud, daughter of Nelson Boucher, Aged 7 years" she writes later that year on April 27. "Died in Pittfield, Massachusetts of Diptheria, Mrs. Emma Thrad, wife of William Adams, aged 19 years," she adds in 27 May, 1883. Such reports are frequent, and she adds in the following weeks mention of funerals, condolence calls, and related visits to families. These reports can help researchers learn more about the spread of disease in such communities, about community and individual responses, and to the degree they were affecting certain gender or age groups. Indeed, while many men die, the reports seem skewed toward women and girls -- perhaps because of Amanda's own relationships to them, perhaps because they were most vulnerable at the time. A mystery that appears consistently throughout Amanda's entries is a coding system, always entered at the right margin of the page. There, a series of 1's 2's and 0's empty or filled mark visits. Yet there is no key for determining her personal system. A wealth of information, Amanda Rockefeller's visitor diary has research opportunities including but not limited to genealogy, household economics and the role of single women in the family, single women heads of household, the role of a prominent family in the economy of a rural community, the history of disease and its spread, cryptography and coding, and paleography. (Inventory #: 3493)
$1,200.00 add to cart or Buy Direct from
Whitmore Rare Books
Share this item

Boston : The Community Church of Boston , 1940
(click for more details about Birth Control and Civil Liberties)

The Writings of Thomas Hardy in Prose and Verse. With prefaces and notes (in 21 vols)

New York : Harper & Brothers , 1920
(click for more details about The Writings of Thomas Hardy in Prose and Verse. With prefaces and notes (in 21 vols))
View all from this seller>