The Trembling of a Leaf: Little Stories of the South Sea Islands. 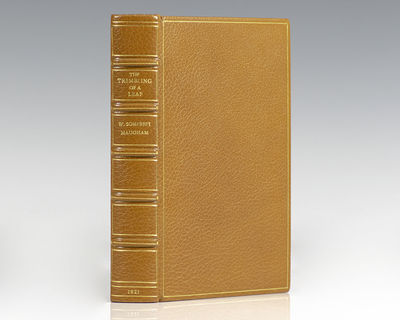 by Maugham, W. Somerset
New York: George H. Doran Company, 1921. First edition of this classic collection of stories. Octavo, bound in full morocco by Asprey, gilt titles to the spine, raised bands, gilt ruled to the front and rear endpapers, patterned endpapers, inner dentelles, all edges gilt. In fine condition. An exceptional example. When noted English writer W. Somerset Maugham set off for the South Seas to regain his health, his experiences would become the bedrock for the stories represented here. These are among Maugham's best work, as well as some of the best stories ever written about the exotic South Seas. Mackintosh is a taut psychological study of two officials on a remote tropic island. The Fall of Edward Barnard is a story about what is important in life, a precursor to Maugham's well-known novel, The Razor's Edge. Love is always a subject of the tropics, and Maugham's deft, ironic handling of the theme in Red and Honolulu is masterful. The Pool tells a poignant and tragic tale about the pitfalls for love across cultures. Maugham's most famous story, Rain, about the ironic consequences of obsession, was adapted for both theater and film. (Inventory #: 115741)
$975.00 add to cart or Buy Direct from
Raptis Rare Books
Share this item